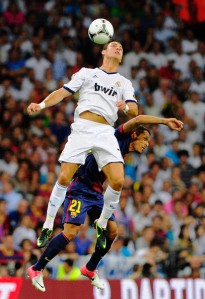 Photo courtesy of zimbio.com. Cristiano Ronaldo (pictured above) as usual played an instrumental role in leading Real Madrid to victory at the Supercopa.

Ben Liebing is a Cincinnati native with a passion for the world, and the world’s sport. While living overseas, the infectious soccer culture that infects the planet outside of America got a hold of his fanhood. He was exposed to the “beautiful game” and hasn’t looked back. When Ben says “football,” he means soccer…by which he means football. But you get it.

This week in the world of the sport that most of the world refers to as football (a ballgame actually played with feet, not hands and conical pigskins), but which Americans term SOCCER…

Much to my dismay, Real Madrid walked away with the cup after getting the better of  FC Barcelona in the 2nd leg of the aggregate match, which was at the Bernebau in Madrid. Cristiano Ronaldo was in fine form – especially as he scored early by taking a long ball at midfield, flicking it forward over his head with his heel, and grounding one past Victor Valdez, the keeper for Barça. It was one of those plays you see only from the very best in the world; and from them, maybe only a handful of times per season. Well done CR7.

Lionel Messi – inarguably the best player in the world – was hounded and triple-teamed most of the game. The little man stayed quiet until late in the 1st half when, in a moment of what has by now become expected brilliance, he sent a long bending free-kick past the Madrid wall, and past Iker Casillas (nicknamed “Saint Iker” for his supernatural goal-keeping) to put the score at 2-1 going into halftime.

But the rest of the night, and indeed the mini-series, belonged to Madrid, as Barça looked unsure and desperate, in large part due to the fact that they were now playing a man down, as Barcelona defender Adriano was sent off with a red card early on – as he flailed in a necessary but doomed attempt to stop Ronaldo in the midst of one of his classic supersonic flights toward goal.

Though it pains me, a staunch Barcelona fan, to say it – the Spanish Super Cup went to the best team on the day. Madrid played well, exposed Barcelona’s shaky defense, and came up with the big goals. And though it pains me to say this more than you can imagine, Jose Mourihno’s coaching (inflated as always by his maniacal super ego) had everything to do with the W.

In English Premier League news this week, headlines held the news that US Men’s National Team star Clint Dempsey is now a member of Tottenham-Hotspur – one of the prominent London teams that is a top-tier power and will be in contention for the UEFA Champion’s League nest season.

To anyone who was following Dempsey, the move came as a total surprise. The American, who had yet another sensational season with Fulham last year, made it obvious at the outset of the trade season that he had little intention on staying at a mid-level club. Clint wanted the big time. He had earned it – and at 29 years old now, he knew this was his last chance to jump into the rungs of footballing elite. His expected suitor was one of the most historic sports teams in the world – Liverpool. Dempsey was interested in them, they in him, and every American soccer fan was hoping to finally see one of our boys break into the uber-big-time.

But Dempsey made a mistake in my opinion. He decided to sit out and essentially quit Fulham before he had even a smudge of ink on paper with Liverpool, or any other team for that matter. He showed his hand – and his price call went down.

It’s unclear exactly what happened with Liverpool, but Tottenham appeared to come out of nowhere to snatch Demspey for a minimal transfer fee of roughly nine million (British pounds, that is). A report from Fox Soccer said that both Aston Villa and Liverpool made offers to Fulham for the American, but their offers were apparently too low.

So Dempsey will go to Tottenham and join a host of English and international talent, including fellow American Brad Friedel, the Spurs’ keeper. What Dempsey has the chance to do with Tottenham should be exciting for anyone who has high hope for the US Team come the next World Cup in 2014. Dempsey will be playing with great players, at the highest level of competition. Usually when great players play with great players in great competition, their level of game rises in the intangible way that only “playing up” can bring you. As for me, that’s what I’m hoping for Dempsey – for his own good, and for the larger good of the noble underground cause that is US Soccer.

If Clint Dempsey does at Tottenham what he has proved he is capable of at Fulham, he’ll be an international star and the type of marquee player that America needs.

Everton, the club that holds the mighty man who is the American goalie – Tim Howard – started their season looking good against powerhouse Manchester United, but then dropped one yesterday, losing 2-0 to the (supposedly lesser team) West Bromwich. Everton has my fan-hood when it comes to the EPL, but they’ve had a tendency to look scattered over the years. Howard is arguably one of the top five or ten keepers in the world, and I know that a lot of fans (both in the states and in jolly old England) would love to see both Howard and the boys at Everton rack up a winning and trophy-clad season.