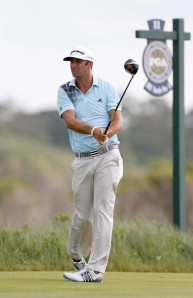 Photo courtesy of zimbio.com. Dustin Johnson (pictured above) hopes to repeat as champion of The Barclays this weekend.

In terms of preseason football, this week is as real as it gets.  Roger Federer continues to cruise as we gear up for the US Open, while Venus Williams continues to demonstrate some amazing fight.  The dog days of August baseball lead into September meaning manager firings, call ups of hot-shot prospects, and heated pennant races.  Last week was a great one, but this week will be entertaining in its own right.  Here are the events to keep an eye on.

5.  Start your engines folks as we head to Bristol.  After an exciting Sunday on the track at Michigan International Speedway, NASCAR heads to Bristol for the NASCAR Sprint Cup Series at Bristol.  The Chase is right around the corner with just three races remaining before the real party gets started at the Geico 400 on September 16th.

4.  In the golfing world, The Barclays will be the name of the game come Thursday.  After a fun event in Greensboro, the PGA Tour heads to Farmingdale, New York for the The Barclays.  After skipping out on the Wyndham Championship, Dustin Johnson will look to become the first back to back winner at The Barclays since Ernie Els accomplished the feat in 1996 and 1997.

3.  The year’s fourth Grand Slam is just a week away.  US Open draws will be released on Thursday.  Will Andy Murray finally capture his first Grand Slam title after taking home gold in London?  Can Roger Federer add an 18th major championship?  Who will provide the thunder on the women’s side?  That and so much more will be answered soon.  For the time being, many of the tours top players will duke it out in Winston-Salem (Men) and New Haven (Women).

2.  Week three of preseason football is for me.  I have never been one to invest much stock into NFL football played before September.  But if there is any preseason game that is similar to the real thing, it is the third game.  Well that is what NFL fans across the country will be treated to Thursday through Sunday.  Also, the countdown to opening night is down to 16.

1.  I am not sure we will ever have another season finale like the one we experienced last year.  That is fine.  With the expanded playoff format, there are still far more teams than normal in the playoff hunt.  Any single-digit game lead is not safe as we learned last season.  Next, the “Boot Bobby V From Beantown” campaign is still making headlines as the Red Sox sit under .500 and in fourth place in the AL East.  In addition, the clock on “Operation Strasburg Shutdown” is nearly down to zero.  My matchup of the week is set to go down in our nation’s capital.

Atlanta Braves at Washington Nationals:  The top two teams in the NL East open up a three-game set this evening.  This could end up being the series where the Nationals run away with the division, or where the Braves led by a rejuvenated Chipper Jones make things interesting.  As mentioned before, “Operation Strasburg Shutdown” is in full effect as far as we know.  The 24-year-old has tossed 139.1 innings on the year.  With a solid performance in the second game of this important series, Strasburg could be down to his final couple of starts.

Atlanta has played extremely well lately and are the second best road team in all of baseball.  Will the road warrior mentality get the job done over the next three days?  Don’t count on it.  The Nationals have Zimmermann and Strasburg on the hill for two of the three games.  Expect the Nationals to take two of three behind their outstanding starting pitching.