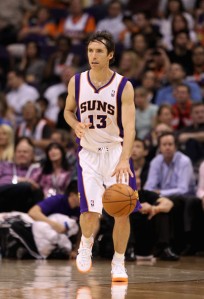 Photo courtesy of zimbio.com. Steve Nash (pictured above) is joining forces with Kobe Bryant in Los Angeles. Will he capture his first ring?

In a shocking twist of events, Steve Nash was shipped off in a sign and trade to the Lakers yesterday to join forces with Kobe Bryant.  Go figure.  Heading into this offseason, it seemed unless the Lakers won the “Dwight Howard Sweepstakes (Soap Opera),” Kobe Bryant’s pursuit of number six would be all for not.  Now winning the “Dwight Howard Sweepstakes” might just be a cherry on top.  Kobe is coming for Jordan’s six. END_OF_DOCUMENT_TOKEN_TO_BE_REPLACED