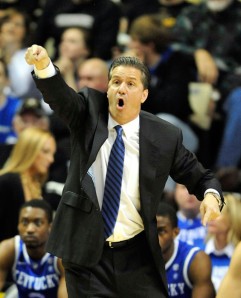 Photo courtesy of zimbio.com. John Calipari (pictured above) once again stole the show at the NBA Draft last evening.

Is anybody else seeing blue?  Eight first round picks came from Kentucky and North Carolina.  Plus, six players out of Lexington were selected on the night (a record). That is a whole lot of blue.  For the first time in NBA Draft history, the top two picks happened to come from the same University.   In addition, the top three picks were not only all freshman, but they were all players out of the SEC East. Go figure.  I thought the SEC was a football conference?  These days, John Calipari is becoming more of a mainstay at the NBA Draft than David Stern.  The following are ten observations from the night in no particular order.

1.  David Stern gets no love.  For all 30 first-round picks, David Stern was showered with loud boos each time he took the podium.  Stern was a good sport about it though.  He has to wonder why the fans seem to love Deputy Commissioner Adam Silver.  I am still wondering right now.

2.  Has Europe become too focused on soccer?  Only one European player was selected in Round 1.  In 2011, three of the first six players selected came from Europe.  Euro 2012 has been fun, but people need to start hitting the hardwood.   Dirk Nowitzki and Tony Parker had to be disappointed with all of the international players falling to Round 2.

3.  In the classic movie Space Jam, one of Michael Jordan’s teammates says, “I mean, you look good when you strike out, man. When I strike out, it looks nasty, man. But at least you look good, man.” MKG went far too high.  I love the grit and determination of the former Wildcats star.  He also has a will to win reminiscent of a young Kobe Bryant.  The only issue is he still has not proven that he has the ability to really score.  Getting to the rim at UK was easy when he was surrounded by a starting five of NBA caliber players.  Now he joins an awful Bobcats team, that will be overmatched every night.  Unless Kidd-Gilchrist demonstrates the ability to score from the midrange and the perimeter, Michael Jordan will have struck out again on draft night in terms of his top pick (at least this one will not be nearly as pitiful as Kwame Brown was).

4.  There were plenty of surprise picks on the evening as is typically the case.  I am not sure any pick shocked me more than Dion Waiters going at number four to Cleveland.  I have always said that this guy has an NBA game.  When watching Syracuse play last season, there was no denying that this guy would see more success at the next level than he did at the collegiate ranks (and he saw plenty in college).  Cleveland is often highly critical of their professional sports teams. Drafting a guy who came off the bench in college with the number four overall pick will likely not be received in the fondest of lights.

5.  The atmosphere at the “Sullinger Draft Party” in Columbus had to be extremely hostile for a good hour and a half.  Satch Sullinger (Jared’s father) was likely sitting on pins and needles as Jared fell deeper and deeper into the first round.  Back problems or not, it is clear that Sullinger made a colossal mistake in returning to Columbus (went from a top 5 guy to number 21).  Fortunately for Sullinger, he is heading to a Boston team with solid veteran leadership and great coaching.  Anyways, PJIII’s fall made Sullinger’s decline look like child’s play, as he dropped all the way to number 28.  Though it should be noted that Perry Jones III is joining a heck of a team out of OKC.

6.  College basketball has dramatically changed over the past decade.  Last evening, the first senior was taken with pick number 17 of the first round (Cody Zeller).  Only four total seniors were taken in the opening round.  Guess how many freshman were selected?  Try eight. Maybe staying at a program and really learning the game is a waste of time.

7.  The importance of the center position has diminished in the NBA over the course of the past decade (Miami didn’t have a true one this year).  Not too many of the League’s elite teams depend on your prototypical center.  I do know that five 7-footers were taken in Round 1.  I am happy for Drummond, Leonard, Zeller, Melo, and Ezeli.  What would life be like as a 7-footer who didn’t play basketball?

8.  The combination of John Wall and Bradley Beal in Washington has some serious potential.  This could help bring the Wizards back from the dead without the use of any wands.  Now John Wall will have a guy to kick the ball out to when he drives and creates.  If Beal can have half the career of Ray Allen (many are comparing the two), he will have been a major success.

9.  Vanderbilt had three players taken in the first 31 picks last evening.  Guess how many tournament wins the Commodores have in the past four years?  Try one.  I guess talent isn’t everything.

10.  Kostas Papanikolaou.  The New York Knicks love to have an unhappy fan base on Draft night.  It is simply tradition.  Anxious fans waited over four hours for their team to make their first selection (New York did not have a first round pick).  They took Kostas Papanikolaou.  Who outside of Fran Franschilla has any idea who this guy is?  Papanikolaou may be great in time, but in the present, Knicks fans are going to be angry.  I don’t think they would have it any other way.