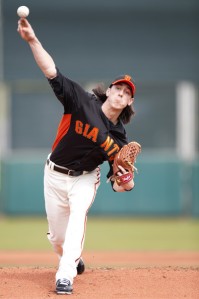 Photo courtesy of zimbio.com. It is safe to say that pitching has dominated the first half of the 2012 season. Ironically, two-time Cy Young Award winner Tim Lincecum (pictured above) has struggled. Will he regain his old form Wednesday afternoon against the first place Dodgers?

What a week it was in sports. The King finally won his ring.  England’s hearts were ripped out once again in the form of penalty kicks.  Plus, the combination of the CWS and Interleague Play gave us all the privilege of watching some outstanding baseball.  Last week was great, but this week will be fun it its own right.  Here are the events to keep an eye on.

5.  See you later Sonoma.  Now it is time to visit the Kentucky Speedway in Sparta, Kentucky.  This event could not even dream of being more poorly planned than it was last year.  I guess that isn’t saying much after the debacle that occurred last July.  Tune in to TNT at 7:30PM on Saturday or make your way on down to the track.

4.  The All-Star Game is just 15 days away.  Is it me, or has this season been moving at warp speed?  It feels like just yesterday that the season got underway with the ridiculous opening two game in Japan between the Mariners and Athletics.  We are already near the halfway point of 2012.  It is safe to say that pitchers have dominated.  19.6% of plate appearances have resulted in strikeouts this season, which is a record pace.  Plus, there has been an average of 14.9 strikeouts per game.  And we are all already aware of the two perfect games.  Pitching is the name of the game.  Just ask teams like Philadelphia and Boston that were supposed to be prime contenders.  My matchup of the week occurs on the west coast.

Los Angeles Dodgers at San Francisco Giants:  It is no secret who the top two teams in the NL West are these days.  They also happen to possess two of the elite pitching staffs in the National League.  Coincidence?  I think not.  The Dodgers got off to a red-hot start and have never really slowed up despite many doubters.  After a slow start, the Giants really got it going towards the end of May and are now right in the thick of things.

The key to this series is where it is being played.  Both of these teams have been two of the best in baseball at protecting their home turf.  AT&T Park will surely be rocking as the Giants look to gain a little ground on the team that they are chasing.  Also, do not be surprised to see Tim Lincecum put together a big time performance in the series finale, as the Giants take two of three and gain a game on the Dodgers.

3.  Germany, Portugal, Spain, and Italy are still standing. The semifinal field is set.  Only one team will be left standing come Sunday evening.  The sleeping giant that is Cristiano Ronaldo has awoken, as Portugal looks to shock Spain on Wednesday.  Plus, Germany, continues to dominate, led by Mario Gomez.  Though it should be noted that the Germans may be without star midfielder Bastian Schweinsteiger against Italy due to a lingering ankle injury in their semifinal matchup.  Euro 2012 is on to the home stretch.  I do not think anyone will want to miss what should be an epic conclusion to the second biggest tournament in all of soccer.

2.  Since the beginning of April, the hype has been mounting.  Come Thursday evening, all of the speculation will finally become a reality.  60 players will have their lives changed, while hundreds of others will head back to the drawing board.  The NBA Draft is set for 8PM on Thursday night at the Prudential Center.  Anthony Davis will go number one.  But who will get selected between pick #2 and pick #60?

1.  The best tennis tournament of the year is under way.  London is the place to be and will continue to be for the vast majority of the summer (Wimbledon and then the Olympics).  All eyes will be on the All England Club the next two weeks.  Can Roger Federer take home his 7th championship in London?  Will Novak Djokovic defend his title?  Or will Andy Murray finally breakthrough and take home a major championship?