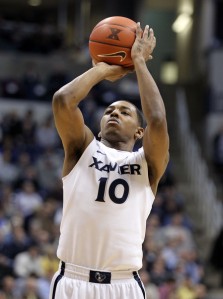 Photo courtesy of zimbio.com. According to our very own Jeremy Powers, Mark Lyons (pictured above) is one of the big transfers to keep an eye on in 2012/2013.

College basketball players are on the move now more than ever. Most programs are in need of that one spark plug to help the team get over that proverbial hump. Here are the top ten college basketball transfers that will help their teams improve this season.

10. Jabari Brown (Missouri) – Brown was a highly talented recruit, which was supposed to help rebuild a Oregon program that hasn’t made it to the NCAA tournament in recent years. After two games in Eugene, the shooter from California jumped ship and will help replace Kim English and Marcus Denmon.

9. Mark Lyons (Arizona) – A former Atlantic 10 standout while at Xavier, Lyons will bring back court depth and leadership to Arizona. Lyons will be making the transition to point guard for his former coach Sean Miller. END_OF_DOCUMENT_TOKEN_TO_BE_REPLACED

Photo courtesy of zimbio.com. Novak Djokovic (left) and Maria Sharapova (right) are the favorites to take home the third Grand Slam of the year.

We are less than a day away from the best tournament in all of tennis.  London is the place to be in sports these days.  First there is Wimbledon.  Then there is the Olympics.  Out of the four major tennis tournaments, Wimbledon holds the most historical significance and is widelyy considered the most prestigious tournament of them all.

The last nine Grand Slams have been won by one of two men.  They also happen to be the current number one and number two ranked players in the world.  Ironically, the last player not named Nadal or Djokovic to take home a Grand Slam championship has won at the All England Club on six different occasions (Federer).  Lastly, 28 of the last 29 Grand Slam titles have been captured by Djokovic, Nadal, or Federer.