No love in City of Brotherly Love 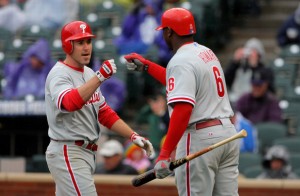 Photo courtesy of zimbio.com. There is not much to cheer about in Philadelphia these days. The returns of Chase Utley (left) and Ryan Howard (right) would help the cause.

Philadelphia is known as the City of Brotherly Love.  Unfortunately, with no football or college hoops going on at the moment, there is not too much love in Philly these days. Things have gone from good, to bad, to ugly.  The Phillies were quickly turning into the second coming of the Atlanta Braves (Atlanta won 14 straight division titles).  They were a team that was on top of the mountain in the National League the past few years (making two World Series appearances in four years) and favored to win the NL East for a sixth consecutive year.  Now they are relaxing comfortably in the NL East cellar.

To add insult to injury, rookie infielder Freddy Galvis will be out the next 50 games due to testing positive for a banned substance.  Now it is not that Galvis is such a key cog to whether the Phillies will be successful, it is the principle of the matter.  Now the team not only has a bad record, their reputation is taking a hit due to this recent news.

By no means am I saying the 2012 season is entirely over for Philadelphia.  There are still around 90 games left and weirder things have happened.  Plenty of baseball yet to be played.  So what has gone wrong is the real question? First of all, seven players currently find themselves on the disabled list.  Not only is two-time Cy Young Award winner Roy Halladay sidelined, the whole right side of the infield, which is worth 35 million dollars this year, has still not shown up (literally).  Ryan Howard and Chase Utley, both perennial All-Stars, have still not laced up their cleats officially yet.  Take away Joey Votto and Brandon Phillips from the Reds, and I can pretty much guarantee that Cincinnati would not be sitting atop the NL Central.  Next, the Phillies are not playing the greatest of defense.  This is very uncharacteristic of a typically very fundamentally sound defensive unit. Also, Shane Victorino, the man they call the “Flyin’ Hawaiian” still has not lifted off this season. Lastly, Cliff Lee has still not won a game.  Yes, former Cy Young Award winner Cliff Lee still does not have a victory this season.  Lastly, it isn’t helping that the Phillies are in the NL East.  Both the NL East and the AL East appear to be the cream of the crop in their respective divisions at this time.

There are plenty of reasons why the Phillies are struggling.  The beautiful thing is that much of this is quite fixable.  Lee has a 3.48 ERA and seven “quality” starts in nine appearances.  He will start winning.  Shane Victorino will eventually depart from the gate and start to fly.  Good players don’t just forget how to play.  See Adam Dunn, though his struggles did last a full season.  Plus, this is a contract year for the speedster out of Hawaii.  Lastly, the right side of the infield will eventually return.  And when it does, the makeup of this team will change in a hurry.

In the present though, there is no love in the City of Brotherly Love.

3 responses to “No love in City of Brotherly Love”