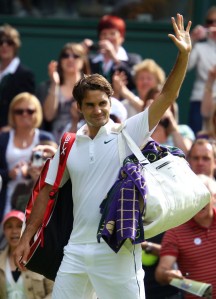 Photo courtesy of zimbio.com. Wimbledon is just a week away. Will Roger Federer (pictured above) capture his 7th title at the All England Club this year?

Great golf, basketball, and baseball defined yesterday’s Father’s Day.  I hope you all enjoyed.  Last week started out with a bang when Rafael Nadal captured his record 7th French Open title and the week continued to pick up steam.  Last week was great, but this week will be fun its own right.  Here are the events to keep an eye on.

5.  The Dale Earnhardt Jr. winless streak finally ends after 143 races. Next stop Sonoma.  The NASCAR Sprint for the Cup continues next Sunday at Infineon Raceway as Kenseth, Earnhardt Jr., Biffle, Hamlin, and Johnson all fight for that number one spot.  There is still plenty of season left, but the competition continues to heat up.

4.  Tommy Haas may be old, but he isn’t dead yet.  Yesterday, at the ripe age of 34, he knocked off Roger Federer in the finals of the Gerry Weber Open.  The most prestigious tournament of them all is just a week away.  Will Novak Djokovic defend his title at the All England Club?  Or could Roger Federer capture his 7th championship at Wimbledon and his 17th Grand Slam title?  Can Andy Murray finally breakthrough at a major in front of his crazed-fan base?  A tune-up is occurring in Eastbourne.  Get ready for the best tournament in all of tennis.  It is just around the corner. END_OF_DOCUMENT_TOKEN_TO_BE_REPLACED