A final for the ages? 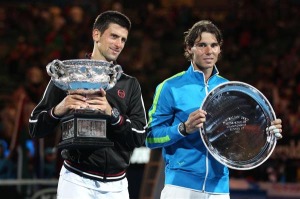 Photo courtesy of tennistournaments4u.com. Above was the site following the Australian Open finals in January. Expect the roles to be reversed on Sunday.

Two weeks ago, the French Open could not have wished for a better final matchup than the one that is set to transpire on Sunday.  Not only are the two best players in the world participating, but they are both playing for history.  Novak Djokovic is going for the “Djoker Slam,” otherwise known has four consecutive Grand Slam championships.  This outrageous feat has not occurred since Rod Laver accomplished the unthinkable feat 43 years ago.  On the other hand, Rafael Nadal is looking to lay his claim to clay-court immortality (if he hasn’t already) in capturing a record 7th French Open title.  Also, Sunday will mark the fourth consecutive Grand Slam featuring the world’s number one and number two ranked players.

Oddly enough, the number one ranked Djokovic is a heavy underdog in my humble opinion.  Despite taking down Roger Federer in straight sets yesterday, the Serbian star is not even playing on the same stratosphere as the pride and joy of Majorca (Nadal).  Not only has Nadal failed to drop a set during the course of his first six matches in Paris, he has won an astonishing 71 of 72 service games.  In addition, he has dropped a stunningly low total of 35 games.  For my mathematicians and statisticians out there, that is a whopping 5.833 games per match or 1.944 games per set.  Djokovic on the other hand has won in straight sets just three times thus far.  He also has been pushed to five sets twice, and saved an unthinkable four match points against French favorite Jo-Wilfried Tsonga.

Novak Djokovic may be the number one ranked player in the world, but on clay-courts, Rafael Nadal is without question the king.  In addition, Djokovic had previously held a six match winning streak against Nadal in tournament finals until a couple of weeks ago when everything changed in Rome.  It is very hard for me to pick against the top ranked player in the world that is going for an amazing fourth consecutive Grand Slam victory.  But this is Paris.  This is Philippe Chatrier.  This is Rafa’s house.

It is a finals matchup for the ages on paper.  Don’t count on it lasting more than three sets though.

3 responses to “A final for the ages?”