Ocho is a no go 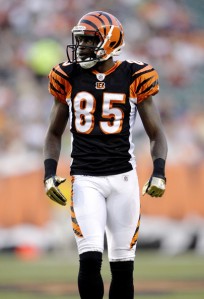 Photo courtesy of zimbio.com. Chad Ochocinco (pictured above) is no longer the dominant receiver he once was between 2003 to 2007. Now he is just an average player who struggles to learn the playbook.

Think back to the year 2007.  Who was the best wide receiver in all of football?   Now right away Randy Moss should come to mind after reeling in a record 23 touchdown receptions and nearly helping the Patriots complete the first perfect season in the NFL since 1972 (Dolphins).  On most people’s list Chad Johnson would rank as number two or three.  Between the years of 2003 to 2007, Chad Johnson was no only one of the most entertaining players in the game, he was always one of the elite.  During the four-year span of 2003 to 2006, Chad Johnson became the only player in NFL history to lead his conference in receiving yards for four consecutive seasons.

Boy have times changed.  Not only has his game seen a colossal decline, his name has changed.  Yesterday, Ochocinco hit rock-bottom when he was released by the New England Patriots after just one season.  As mentioned earlier, Ochocino was one of the best players on the planet not that long ago.  Since, he has become arguably the most influential athlete in the world of social media, and possibly the least influential on the actual field.  Ochocinco may have nearly 3.5 million followers on Twitter, but he amassed an abysmal 15 catches last season for a meager 276 yards and one touchdown. END_OF_DOCUMENT_TOKEN_TO_BE_REPLACED