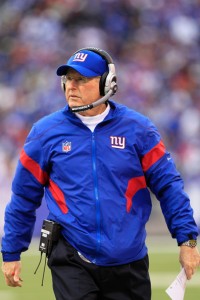 Photo courtesy of zimbio.com. Tom Coughlin (pictured above) has been highly criticized over the years. Yesterday, he finally received some of the credit he deserves in signing a three-year extension worth 20 million dollars.

Tom Coughlin never actually looks happy.  He was likely smiling on the inside yesterday though when he signed a three-year contract worth 20 million dollars.  Not too many coaches have sat on a hotter seat than Coach Coughlin has during his “tumultuous” eight years roaming the sidelines at the Meadowlands.  Yesterday, Coughlin was finally awarded monetarily for bringing the Giants their second Super Bowl championship in five years.

The harshest critics in the world reside in New York City.  If you can’t take the heat, then get out is the motto in the Big Apple.  Over the years, Tom Coughlin has dealt with as much, or more heat, than any other coach in the NFL (that still has a job).  If we are being entirely honest, if the Giants had failed to win in Week 16 and Week 17 last year, Coughlin likely would have been fired.  Instead, the Giants went on a magical run of six straight victories resulting in the organization’s fourth Super Bowl championship.

I for one have never understood the skepticism in regards to Coughlin. END_OF_DOCUMENT_TOKEN_TO_BE_REPLACED