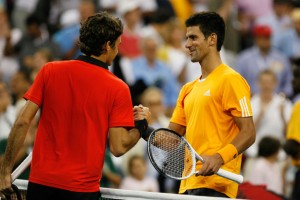 Photo courtesy of zimbio.com. The anticipation mounts as the tennis world gets ready for a Federer (left) versus Djokovic (right) rematch in the semfinals of the French Open.

Back on June 3, 2011, Novak Djokovic was riding a 43-match winning streak and taking the tennis world by storm.  He had cruised into the French Open semifinals and was set to take on arguably the greatest player in the history of tennis, Roger Federer.  Rafael Nadal anxiously awaited in the finals as he looked to capture his sixth French Open championship.  To Nadal’s delight, Roger Federer shocked the world, and ended the seemingly invincible Novak Djokovic’s remarkable streak (Nadal has always owned Federer on the clay).

Fast forward to 2012.  Novak Djokovic is the unquestioned number one player in the world these days.  He has won 26 straight matches at Grand Slam tournaments, and he finds himself just two matches away from the “Djoker Slam” (winning all four in a row).  To Novak’s disdain, a familiar opponent is awaiting in the semifinals.  Both Federer and Djokovic survived thrilling five-setters yesterday to set up a very highly anticipated rematch.  Luckily for both players, they have the luxury of two off days before they take center stage at Philippe Chatrier. END_OF_DOCUMENT_TOKEN_TO_BE_REPLACED