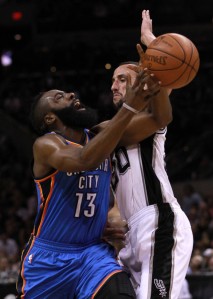 Photo courtesy of zimbio.com. The two best bench players in the NBA put on quite a show last night. James Harden (left) hit the big shot in the end though to help the Thunder go up 3 to 2 in the Western Conference Finals

We could quite possibly be watching history in the making in regards to NBA Playoff basketball.  94% of teams that have gone up 2 to 0 in best-of-seven NBA series have gone on to take the series.  Only 14 teams in NBA history have ever climbed out of a 2 to 0 hole to win a best-of-seven game series.  Both conference finals series began with the higher seed taking a 2 to 0 lead.  Things appeared to be over.  Then both lower seeded teams miraculously defended their home floors (and OKC won one on the road last night).

Can Boston and/or Oklahoma City pull off the unthinkable?  Oklahoma City can.  Yes, I am going to keep doubting San Antonio.  I wouldn’t count on it from Boston.  The Thunder have been the team to watch out West all year.  Despite a very slow start in the conference finals, their bigs (Ibaka namely) awoke in Game 4 and James Harden hit the shot of the year in Game 5.  Remember, Westbrook and Harden combined for a mere 18 points on Saturday.  OKC still won.  Last night, the OKC bigs, Ibaka and Perkins combined for just 13 points.  OKC still won.  The Thunder will knock off the Spurs and become team number 15 to climb out of a 2 to 0 hole. END_OF_DOCUMENT_TOKEN_TO_BE_REPLACED