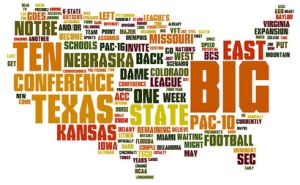 Photo courtesy of thevictoryformation.com. Our very own Nick Craddock gives his thoughts on NCAA Conference Realignment.

There are college football dudes and college basketball guys. I’m more of a college basketball guy. I suppose it’s part of my genetic makeup, like it was in my Canadian forefather, Dr. James Naismith. But now, conference realignment is becoming downright cumbersome as it seems to be forcing me to cater to college football at the cost of quality collegiate hoops from top to bottom of Division I.

I’m not naïve enough to think that the NCAA is not (at least in part) driven by making money and although I was unhappy with the first wave of conference realignment in the fall (i.e. the one where Boise State became a member of the Big East among other moves where the major conference poached teams from one another), the desire for BCS schools to ensure their BCS Conference auto-bid status, lock up lucrative bowl tie-ins, and find the best television markets and contracts was rational.

Rivalries were shattered, athletic departments’ future travel budgets soared, and conference monikers became incredibly stupid (of course, everyone knows 12 teams play in the Big Ten, but 10 teams play in the Big 12, that’s just good logic). But money was to be made so fans were supposed to embrace the change and start booking off work now for those cross-country drives to see the heated Rutgers-Boise State series in person.

Big-time college football may have been evolving as the rich continued to get richer, but at least college basketball, usually an afterthought in all of this realignment, wasn’t going to change radically. After all, though you’d love to see Missouri and Kansas continue to do battle on the hardwood twice a year as Big 12 conference foes, the more flexible nonconference schedules in basketball would still allow for teams to preserve some rivalries lost to conference realignment. And who would really care about conference alignment when March Madness rolls around, right? Then it’s every team for itself regardless of conference affiliation. But only to an extent.

While the bigger conferences in college basketball may be unaffected by the realignment, the next wave of realignment which has in part come in the form of Conference USA and the Atlantic 10 (alas, just another numerical lie!) strengthening their respective conferences may have grave consequences. For example, the Colonial Athletic Association, one of the best mid-major hoops conferences, is now in a bind after losing key members thanks to this game of conference musical chairs.

Unlike the teams from the major conferences which have no problem scheduling conference play, like in the CAA of old, offered teams which might not be able to get marquee nonconference matchups a chance to play quality competition from January onward and have an outside shot at building a resume worthy of an at-large bid.

Now, two of those three members are leaving. VCU is leaving for the Atlantic 10. Old Dominion is departing for Conference USA. George Mason will remain in the CAA after flirting with the idea of departing. This triumvirate of Virginia schools has been instrumental in raising the profile and level of play of the CAA, but that is unlikely to continue with only one-third of the most recognizable trio continuing play beyond 2013.

With Georgia State also leaving the CAA, it seems in one fell swoop that the hard work in building the conference was undone in a split second thanks to conference realignment.

Part of the reason college basketball is so appealing is the parity that the sport offers, especially when compared to college football. For every one Appalachian State beating a Michigan, there are countless Cinderellas in the NCAA tournament every year.

Well established mid-majors will continue to make the postseason, nab the occasional high-star recruit, and it will be business as usual for those teams that have established themselves on the national scene. However, if too many mid-majors depart their conferences for seemingly greener pastures, then it seems possible that the gap mid-major schools bridged between the so-called lesser conferences and the major conferences will once again become a chasm that may take many years to bring back the parity that college hoops now enjoys.

Conferences should strive for quality over quantity, but that doesn’t seem to be the modus operandi of the new landscape of collegiate athletics. Polarity in grouping the most attractive teams in one place and leaving the rest to fend for themselves will not be beneficial in the long term.

For as long as conference commissioners deplete competing conferences of their member institutions, the shift to a mish-mash of schools with no historical or geographical connections seems inevitable. And I’ll be tempted to become more of a college football dude.