Kings will win the Stanley Cup (I think…) 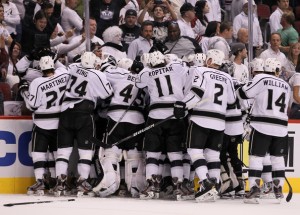 Photo courtesy of zimbio.com. This was the scene late last night as the Los Angeles Kings (pictured above) clinched a spot in the Stanley Cup. Can they win it all?

Don’t fret about the aging Lakers, good people of Los Angeles, your Los Angeles Kings will win the Stanley Cup and bring joy and a championship banner to the Staples Center soon enough. Without being so bold as to bet my own money, I would assure any willing (and possibly chronic) gamblers to place their bets on the team in Black and White to hoist the Cup as NHL champions in June.

Despite Games 4 and 5 of the Western Conference Finals arguably being the sloppiest two games of the Kings’ playoff run to date, the boys from LA managed to edge the Coyotes 4-3 in overtime in Game 5 to take the series in five games and advance to the Stanley Cup to face the winner of the New York Rangers and New Jersey Devils. Somehow, the Kings survived a lackadaisical start, particularly from stars Mike Richards and Jeff Carter, a 5-on-3 Coyotes powerplay in the third period, and a Phoenix powerplay in overtime to avoid giving the fellow upstart Coyotes yet another breath of life in the series.

Really, the Kings were just a “Mike Smith” away from sweeping the Coyotes in four games as the Phoenix goaltender briefly returned to his earlier round form in pushing the series back to Glendale, Arizona for what turned out to be the decisive Game 5.

Still, the fact remains that the Kings have only needed 14 games to dispose of the Western Conference’s top three seeds and own a perfect road record (8-0). The small sample size of games has been proof enough that the Kings are playing the best hockey of any team in the playoffs.

The goaltending has been outstanding, the physicality has been bruising and the Kings’ up-tempo, end-to-end style has been as entertaining as the NHL could’ve hoped for in the post-lockout, more open style of game.

Much of the Kings’ strong play may very well be attributable to the fact that they had to play postseason caliber hockey just to squeak into the playoffs after a horrid start to the season. In a way, the poor start was a blessing because it paved the way for Daryl Sutter to become head coach of the Kings for the final 49 games of the regular season (he posted a 25-13-11 record as coach).  Sutter has experienced taking a lower-seeded Western Conference team to the Stanley Cup Finals when he led the sixth-seeded Calgary Flames to within one game of winning it all in 2003-2004. That Calgary team was the only other team in NHL history to knock out the top three seeds in the Western Conference en route to the final round of the playoffs.

However, for as much as the Kings have been dominant, there is a concern that they will hit a brick wall when the high-flying style of play that Sutter has implemented faces either the Rangers or Devils’ defensive-minded playing styles. But those two teams are not helped by the fact that they haven’t been able to dispose of their opponents as quickly as the Kings.

While the Kings have been rolling along in these playoffs, the Rangers, who appear to have the slightest of margins over the Devils because of home-ice advantage in what has become a best-of-3 series, have been taken to the max twice already by the Senators and Capitals and are again locked in a physically and mentally punishing series with the Devils. The longer series they’ve experienced might finally be taking their toll. After giving up no more than three goals in a game in their first 17 playoff games — their bread and butter — the Rangers finally surrendered four goals to the Devils in their last game.

Whereas the Devils were taken a full seven games by the unintimidating Florida Panthers and then were buoyed by the self-implosion of what appeared to be a solid Philadelphia Flyers team.

In the end, either of the teams from the East Coast will likely be letting down their East Coast brethren in a good ole’ fashioned West Coast-East Coast feud, making the Eastern Conference hope “It Was All a Dream,” while the Kings get some “California Love.”

With the people’s beloved Lakers eliminated (ahem, and the Clippers), the Kings have now been thrust into the Hollywood spotlight in LA. But this overachieving No. 8 seed seems accustomed to the limelight, and in fitting with its Los Angeles pedigree, has already been acting like a champion in this year’s playoffs.

3 responses to “Kings will win the Stanley Cup (I think…)”