Go to bat for Woodson 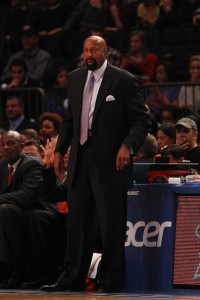 Photo courtesy of zimbio.com. Isn’t it a no-brainer who the Head Coach of the New York Knicks should be in 2012/2013? Mike Woodson (pictured above) is clearly the man for the job.

405 and 563.  3 and 14.  These are the records of the New York Knicks in regular season and postseason play since the departure of Patrick Ewing.  New York has seen better days in terms of basketball to say the least.  After finally breaking their woeful record setting 13 game losing streak in playoff play, New York has many question marks as they prepare for Game 5 of their first round series with the Miami Heat.

Let’s be entirely realistic though.  I have a better shot at winning the lottery than the Knicks do at winning the next three games against the Miami Heat and advancing to the Eastern Conference Semifinals.  Who will be manning the New York sidelines during the 2012/2013 season?  That is the real question.

Unless Phil Jackson miraculously decides to come out of retirement and take over the reigns, Mike Woodson is the man for the job.  Since taking over as interim head coach back on March 14th, Woodson led the Knicks to a very respectable 18 and 6 finish and led the team to their first playoff victory since the year 2000 (granted they will likely lose in Game 5 tonight).  Woodson is the consummate professional.  He has vehemantly denied any contract negotiations and is doing all in his power to focus the attention on his players and Game 5.  This is the way it should be.

People seem to have forgotten the job that Woodson did with a fruitless Atlanta Hawks franchise a few years back.  During year one in Hotlanta, Woodson led the Hawks to an abysmal 13 and 69 record.  By year six with the Hawks, Woodson led the Hawks over the 50 win plateau and to a very respectable 53 and 29 record.  Woodson is no inexperienced slouch off the street.  He has seen success at past stops, leading Atlanta to three playoff appearances, and has New York, despite a plethora of injuries, playing far better than they were under D’Antoni.

Even Carmelo is behind Woodson.  And as we all know, getting the blessing of superstars these days in the NBA is no easy task and can sometimes be the biggest hurdle for new coaches.  Though the Knicks will likely get knocked out tonight or in Game 6, Woodson has earned the opportunity to lead New York during 2012/2013.