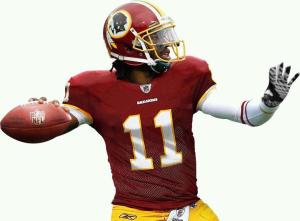 Photo courtesy of thenewsportsguru.com. Robert Griffin III (pictured above) and other rookies are getting their first reps with their new employers already.

The word “playoffs” is the best way to describe the wide world of sports over the past week.  And guess what.  “Playoffs” will continue to be the heart of the sporting world this week. Here are the main events to keep an eye on.

5.  Wednesday was one of the most wild days in recent memory regarding the NFL.  It even topped the Manning/Tebow bonanza.  There was some good, some bad, and some sad.  Well rookies like Andrew Luck, Robert Griffin III, and others are getting their first real workouts in with their new employees.  Keep an eye out as rookie minicamp finishes.

4.  Say hello to Madrid.  Whether you are a fan of tennis or not, you must admit that they have some pretty cool tour stops.  This week, the bus stops in Madrid.  Can Nadal continue to rewrite the record books of clay court tennis?  Or will Novak Djokovic, Roger Federer, and Co. have something to say about it?  Clay court season is in full force as the always exciting French Open creeps closer.

3.  For all of my Cincinnati Reds diehards out there.  I have an alarming statistic.  Currently, the three top home run hitters in the American League are former Reds.  If only Cincinnati could rewind the clock to December 21, 2007 and nix the Hamilton/Volquez trade.  Everything happens for a reason though and teams must live in the present.  Just ask the Los Angeles Dodgers about that.  Who else is completely floored that the Baltimore Orioles and Cleveland Indians are currently sitting atop their respective divisions?  Or that the Philadelphia Phillies, Los Angeles Angels, and Boston Red Sox are all occupying cellar spots?  Baseball is a funny sport.  Though it should be noted that this is not a sprint, but a marathon.  My matchup of the week takes place at Camden Yards.

Texas Rangers at Baltimore Orioles:  Anyone who claims that they envisioned Baltimore’s hot start is lying.  The Orioles are truly defying the odds, while the Rangers are living up to expectations.  Jason Hammel has been simply sensational in leading the O’s pitching staff to the top ERA in the American League.  Texas on the other hand has not only been electrifying from an offensive standpoint, they also have some pretty solid pitching in their own right.  They are the most balanced team in the MLB at least in the present.  The current five game win streak the Orioles are sporting will end this week, as the Rangers take three of four at Camden Yards.

1.  Just start referring to Sunday as “Melo Day.”  If only the New York Knicks could schedule all of their playoff games on Sundays.  I am happy the New York Knicks were able to avoid an embarrassing sweep and end their woeful 13 game playoff losing streak.  Sadly though, they have a better shot of winning the lottery than reeling off three straight against the Heat.  Chicago is in shambles.  Mark Cuban is beyond angry.  And the Grizzlies/Clippers series continues to amaze.  Playoff basketball is in full force.  This is why the NBA’s motto was once, “I love this game.”