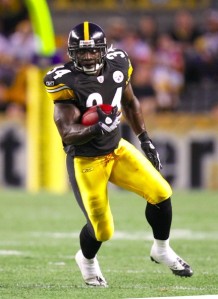 Photo courtesy of zimbio.com. A year ago, Rashard Mendenhall (pictured above) made some inappropriate comments on Twitter. The importance of Twitter in sports continues to grow by the day.

We have reached the four-month anniversary of “Throwback Saturdays.”  This is a day where we reflect on what was going on in the wide world of sports one year ago and two years ago.  In addition, it is an opportunity to see just how right or wrong I was at the time in my analysis.  So what was happening on May 5, 2011?  How about on May 5, 2012?  Let’s find out.

Twitter: A Best Friend or Worst Enemy of Athletes

For the athletic forum, Twitter can also be a great thing.   People are able to receive news instantaneously from millions of sources.  In addition, people are able to interact with players, coaches, and various sports personalities through “tweets.”  What could be better than creating a way for fans to actually relate with the athletes they idolize and cheer for?  Guys like Chad Ochocinco have used the Twitter world and the whole forum of social media to their advantage increasing their popularity exponentially.  The majority of athletes have caught on to this by now and are doing what they can to create a greater appeal to a larger fan base via Twitter.

Some guys just don’t get it though.  And there is one guy that comes to mind when I think of those that are “Twitter Incompetent.”

Now, Mendenhall has turned into a fine running back that played a key role in leading the Steelers to an AFC Championship this past year.  But boy has he struggled with his utilization of the Twitter World.  First he made comments backing up already hotly contested comments by fellow NFL Player Adrian Peterson, which compared NFL Players to slaves.  Now he has spoken out against Americans celebrating the death of Osama.  Talk about two heavy topics to hit on the wrong end of the stick (To finish read this post, click this link).

Mendenhall made a mistake.  He failed in his utilization of Twitter.  This by no means makes him a bad person.  Over the course of the past year, Twitter has continued to grow at exponential rates.  Twitter is a huge part of our society.  Guys like Chad Ochocinco, Brandon Phillips, and many others have mastered the art of tweeting.  Plenty are still lagging far behind.  Mendenhall had a down year in 2011/2012.  This was not due to his ineptitude on Twitter.

These guys are all five some of the premier players that the NBA has to offer today.  This demonstrates that the NBA is not all about just scoring points.  If you want recognition as one of the superstars in the game, you better D up.  People accuse Kobe Bryant of playing lazy defense.  Well I think  you need to get your glasses out.  The man has made the All Defensive Team five consecutive years.  This is no fluke.  Rondo and Wallace are both first timers.  Rondo is a rising star as I talked about the other day.  Wallace just had a career season and made his first All-Star Appearance.  Then of course Dwight Howard is no stranger to this in that he is the Defensive Player of the Year for a change.  This is also Lebron’s second time on the team.  Go figure in both of these years, he has also secured the League’s MVP Award (To finish reading this post, click this link).

When Kobe Bryant took a more vested interest in his defensive prowess, he was able to win rings without Shaq.  When LeBron James placed a heavy emphasis on the defensive end of the floor, he took home multiple MVPs and is getting closer to a ring.  Kevin Durant is even taking a major interest in his ability as a defender these days.  If you want to be a superstar in the present version of the NBA, the uncanny ability to score at all times is not enough.

Two years ago, I made it clear that I felt teams with a superstar that could do it on both ends of the floor exponentially increased their  teams chances of taking home the Larry O’Brien NBA Championship Trophy.  Two of the superstars that made the All Defensive Team squared off in the finals.  Kobe cut down the nets.  Defense does indeed win championships in the NBA.  Keep a close eye on Miami, San Antonio, and the Lakers as the playoffs continues.  All three of these teams “D” up.