Will the curse apply to Megatron? 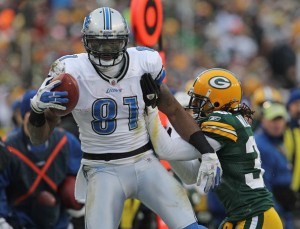 Photo courtesy of zimbio.com. Calvin Johnson (pictured above) was unstoppable last season. Will the Madden Curse slow down the guy people refer to as Megatron?

Things are good for Calvin Johnson these days.  He just had a career year in which he took NFL secondaries by storm reeling in 96 catches and 16 touchdowns.  The guy was simply phenomenal in every sense of the word.  He lived up to his well-known nickname “Megatron.”  In addition, the Detroit Lions made the playoffs for the first time since 1999.  Lastly, CJ just signed a robust contract for eight years and 132 million.  Things just got even better yesterday.

Calvin “Megatron” Johnson will appear on the cover of “Madden NFL 2013.”  A highly regarded honor for NFL players these days.

Nothing is ever as good as it seems though.  Don’t tell me that you are not aware of the widely known Madden curse.

The first edition of Madden NFL (the video game) was released in 1988.  Ever since, the game that bears the name of one of the NFL’s all-time great coaches has become a phenomenon.  Starting in 1999, players began appearing on the cover.  Here is a history of the cover boys.

1999-Garrison Hearst:  Hurt his ankle in the playoffs and was never ever the same.

2000-Barry Sanders:  Retired out of nowhere forcing Madden to re-release the cover.

2000 re-release-Dorsey Levens:  Had a rough season in which Green Bay failed to make the playoffs.  He was never the same.

2001-Eddie George:  Following a disappointing early exit from the playoffs, he never averaged more than 3.4 yards per carry for the rest of his once very promising career.

2002-Daunte Culpepper:  Was absolutely awful following his cover appearance throwing 23 interceptions and leading the Vikings to a 5 and 11 record.

2003-Marshall Faulk:  Career waned forcing him into the broadcast booth probably sooner than he would have liked.

2004-Michael Vick:  Broke his fibula in a preseason game and missed the entire season.

2005-Ray Lewis:  Played through a major wrist injury and went without an interception for the first time in his illustrious career.

2006-Donovan McNabb:  Suffered a sports hernia in the season opener and later tore the ACL and meniscus in his right knee.

2007-Shaun Alexander:  Missed a significant portion of the season and his career regressed thereafter.

2008-Vince Young:  Guy has never really had much of a professional career to begin with.  Did suffer through a very injury-prone year following the cover appearance though.

2009-Brett Favre:  Appeared on the cover originally as a Packer only to play for the Jets.  He had a rough year in which he was a main factor in the Jets failure to make the playoffs.

2010-Troy Polamalu and Larry Fitzgerald:  Troy suffered an MCL injury in the season opener and then hurt his posterior cruciate ligament against the Bengals.  This forced him to miss more action.  Larry Fitzgerald was unaffected by the curse and had a great year in which he played in all 16 games.

2011-Drew Brees:  His numbers went down across the board and his team lost to the Seattle Seahawks in one of the biggest postseason upsets in NFL history.

A very solid list of players that anybody would be humbled to be associated with.  Sadly, the majority of these guys suffered following their big cover appearance on the popular video game.

The curse can be defeated.  Just ask Larry Fitzgerald.  Wide receivers are one for one in having a successful season right after appearing on the Madden cover.  No cornerbacks were able to contain Calvin Johnson last season. Will Megatron continue to put up video game like numbers or will the curse of the video game ruin his upcoming campaign?  Detroit will hold their breath in the meantime.

We will find out soon enough.