Dunn is not done yet 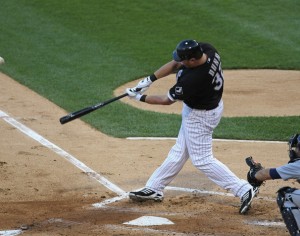 Photo courtesy of zimbio.com. Adam Dunn (pictured above) is off to a solid start for the Chicago White Sox after an awful 2011 campaign.

Four years and 56 million dollars is a large chunk of change.  Back on December 3, 2010, that amount is what the Chicago White Sox offered Adam Dunn, aka the “Big Donkey,” to come play in Chicago.  At the time, this appeared to be a very solid pickup for Chicago’s stepchild (White Sox).  A four-year deal during the prime of Dunn’s career (late 20s/early 30s).  Many expected Dunn to be a key offensive cog that would help lead the White Sox back to the playoffs.  Things did not go exactly as planned in 2011.

This was Dunn’s batting average, home run, and RBI totals in 2011.

Dunn made the Mendoza line (.200 batting average) look like an anomaly.  The guy was absolutely awful.  His confidence was completely shattered.At times Dunn, who was once considered one of the most feared power hitters in baseball looked like he did not know where he was.  He could have been swinging at beach balls and still missing.  It was that bad.  And the White Sox limped their way to a disappointing 79 and 83 record.  The entire city was outraged (likely President Obama too).  How could a guy that a team was paying an average of 14 million a year make a run for the title of “Worst player in the MLB?”

Remember, this is the same guy that hit at least 38 home runs and drove in at least 92 RBIs for seven consecutive seasons.  Much of this happened during the post-steroid era as well.  Off years happen.  But 2011 was downright pitiful for Dunn in every facet.

I am going to go to bat for the “Big Donkey” though.  Dunn had played ten years in the National League.  Outside of interleague play, he had never seen American League pitching.  American League baseball and National League baseball are different.  There are different players and a different style of play.  Sure Dunn made the adjustment much more difficult than it probably should have been,  but hitting in the MLB is no easy task.  Even if you are a player bringing in 14 million dollars a year.

Well guess what, Adam Dunn is back to his old ways (or so it seems).  After a slow first couple of weeks, Dunn seems to have regained his stroke and his confidence as of late. Dunn entered play last evening with four home runs, 14 RBIs, and a very respectable .250 batting average.  Maybe it was just a matter of time?  Maybe the guy is a head case?  Either way, the White Sox couldn’t be happier that the big guy seems to have refound his hitting ability.

Chicago went into play last night tied with the Detroit Tigers atop the AL Central.  In addition, their abysmal offense from a year ago is no more.  They have morphed into a solid offensive unit to compliment their outstanding pitching staff.  This in large part is thanks to the re-emergence of the seemingly down and out Adam Dunn (and the outstanding play of Alex Rios, Paul Konerko, and A.J. Pierzynski).

Hold the press.  Adam Dunn is not done yet.

4 responses to “Dunn is not done yet”