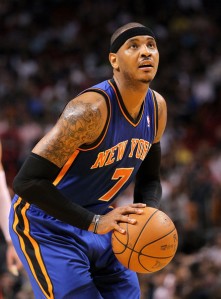 Photo courtesy of zimbio.com. Carmelo Anthony (pictured above) is playing is best basketball as of late. It has become "Melo Time" in New York.

It was the best of times, it was the worst of times. New York Knicks basketball relived the glory days of the early 1970s during the 1990s.  The best was when they made the NBA Finals in both 1994 and 1999.  The worst times for the Knicks during the 1990s were declared “Miller Time.”  Now this had nothing to do with Miller High Life.  It dealt with the villain, Reggie Miller, stealing games away from the New York Knicks during the postseason.  With Miller in the broadcast booth these days, the thought of “Miller Time” has been extinct for nearly a decade.

There is a new time now in New York.  And this one has a much happier ring than “Miller Time.”  No it is not “Linsanity,” though that is joyous occasion for Knicks fans as well.  It is the recent emergence of “Melo Time.”  Carmelo Anthony is playing better basketball than any player on the planet at the moment, and looks to have the Knicks poised to surprise some people in the playoffs. Now I am more than aware that New York currently sits at 33 and 29 on the year, and looks to have an inevitable date with the ultimate villains, the Miami Heat.  But is it really that far-fetched to think this New York team could make a run?  I will let you decide for yourself.

Now I want you all to think back.  The last time there was a strike-shortened season was in 1998/1999.  That year, the New York Knicks limped their way into the playoffs with a record of 27 and 23, securing the eighth and final seed in the Eastern Conference.  Ironically, the one seed in the East that year was their bitter rival at the time, the Miami Heat.  I think you all know what happened in that series (Knicks won in five games).  Now was the 1998/1999 version of the Miami Heat nearly as good as the 2011/2012 version?  Not a snowball’s chance.

The NBA playoffs are all about who gets hot at the right time.  Just ask Mark Cuban and the Dallas Mavericks.  A strike-shortened season adds to the parity of playoff time as teams are finding their mojo a little bit later in the year.  Though the Knicks have dealt with a plethora of injuries, they have won seven of their last ten games.  The majority of their recent success is due to Carmelo Anthony.

Not only is Anthony putting up outrageous numbers, but he is handling business at crunch time.  Some players have a knack of coming up big at the most critical of times.  Anthony is one of those guys.  He has what many call the clutch gene. During the last decade, Carmelo has shot the highest percentage from the field during game tying/go-ahead situations in the final 15 seconds of the 4th quarter or overtime (46.2).  In the last ten games, Anthony is averaging nearly 31 points a night on 51% shooting.  In addition, he is pulling down 7.5 rebounds a game.  Lastly, his defense seems to have risen to a new level.  All of the great ones these days play lock down defense to compliment their lethal offensive games .  See guys like LeBron James, Dwyane Wade, and Kobe Bryant.  Even if you delve back into the 1990s, Michael Jordan could “D” up with the best of them.  Carmelo seems to finally get it.  Just in time for playoff time.

Mike D’Antoni has to be shaking his head in confusion as to what Carmelo is doing as of late.  While D’Antoni is shaking his head, current New York Head Coach Mike Woodson can’t stop smiling.  I realize the odds are stacked against New York to make a playoff run.  But think back to 1999 and realize it is crunch time which can only mean one thing.