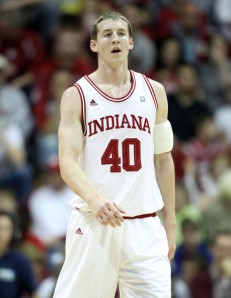 Photo courtesy of zimbio.com. Cody Zeller (pictured above) is projected as a sure-fire lottery pick. Yet, he is on the fence about whether he should stay in Bloomington or take his talents to the NBA. He has 20 days to make up his mind.

Sunday was truly a “fun” day in the sporting world. Masters insanity.  Carmelo put on a Broadway-esque performance in the Big Apple.  And John Isner led the US Davis Cup team into the semifinals.  It was a wild Sunday to say the least.  Last week was fun.  But this week is poised to be every bit as entertaining.  Here are the events to keep an eye on.

5.  Should I stay or should I go?  Many college basketball players across the country are pondering this question as they heavily weigh their options on if they should spend more time at the collegiate ranks, or try to take their talents to the professional level.  Every year there are guys that declare, that really have no business departing. Also though, there are always guys that could have left, that decide to stay for another year and continue to refine their skills 20 days remain for the non-seniors to make up their minds.  Remember, only 60 players will get drafted come June 28th.

4.  Spring football is out in full force as each of the 119 Division 1-A (Football Bowl Subdivision) football programs hopes to be the team hoisting the BCS National Championship Trophy on January 7th.  Who doesn’t love the Spring Game?  This is the first real look the public gets at what is in store for the upcoming season.  There are plenty of Spring Games of note this weekend: Alabama, Michigan, Oklahoma, USC, Clemson, and Missouri all take the field on Saturday.  The defending champion Crimson Tide and the Matt Barkley led USC Trojans are expected to be major contenders to win the take home the title in January.

3.  Major League Baseball is back in full-force.  Ballparks across the country have been rocking to “Take Me Out to the Ballgame” and nail-biting finishes.  Both the Yankees and Red Sox currently are holding down the AL East cellar with 0 and 3 records.  Go figure.  1966 was the only other time that both of these historic franchises started out the year 0 and 3.  In addition, the Tigers seem to be the real deal, behind the lethal combo of Miguel Cabrera and Prince Fielder.  Spring is in the air.  My matchup of the week takes place in the new home of the Prince, Detroit.

Tampa Bay Rays at Detroit Tigers:  Many expected big things from both of these teams.  Well thus far, both have delivered.  The Rays dismantled the Bronx Bombers in their opening series, while the Tigers really did a number on the Red Sox.  Do not expect either of these teams to slow down either.  They both have great pitching to go along with great hitting.  With it being so early in the year, it is very hard to predict series.  But I will go with Detroit to take two of three though, with these games being played at Comerica Park and with Justin Verlander taking the mound in one of the three games.

2.  Watching the Knicks/Bulls game yesterday reminded me of why the NBA slogan used to be “I love this game.”  It also definitely demonstrated why the current slogan is “Where amazing happens.”  Carmelo Anthony and Derrick Rose put on an amazing show at the world’s most famous arena.  In the end, Carmelo’s “Clutch Gene” was too much for the Bulls.  Have no fear Bulls fans.  The Knicks will be visiting the United Center on Tuesday night.  Boy would this be an entertaining opening round series.  Could it bring back memories of when the New York Knicks shocked the Miami Heat as an eight seed in the 1999 playoffs (last strike-shortened season).  The regular season is nearing the end with the final night of play scheduled for the 26th.  My eyes are focused on a great matchup in San Antonio on Wednesday.

Los Angeles Lakers at San Antonio Spurs:  Who is currently the hottest team in the NBA?  That would be the team that everyone said was too old.  Not only do the San Antonio Spurs currently sport the best record in the Western Conference, they also have more experience than any team in the field (yes that includes the Lakers).  This years Spurs have been unusual in the respect that they rely more heavily on their offense than their defense to win games.  But Gregg Popovich always seems to find ways to win ball games.

The Lakers on the other hand have played very mediocre as of late, dealing with internal issues (see Andrew Bynum), but are still clinging to a very slim lead over their crosstown rival, the Los Angeles Clippers. The Lakers will do all in their power to clinch as much home court as they can in the playoffs.  Better yet, they have to.  They have demonstrated loud and clear that they can win at the Staples Center.  Unfortunately, they have not shown that they can win outside of LA.   Anytime the Lakers have “had” to do something over the past 15 years, Kobe Bryant has made it happen.  Look for Kobe to put on a show as the Lakers prove they can play with the big boys out West.

1.  What are the best playoffs in professional sports?  Well if you watched closely last year, the NHL would have to rank pretty high.  The NHL playoffs last year were absolutely ludicrous as four of the eight first round series went to a seventh game.  Expect more of the same this year when the first round starts on Wednesday night.  I am extremely excited to see what happens in the East’s 4/5 matchup, that pits bitter rivals Pittsburgh and Philadelphia.  It’s a great day for hockey.