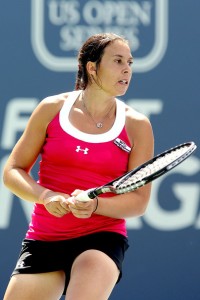 Photo courtesy of zimbio.com. Wouldn't it be a shame if current world #7 Marion Bartoli (pictured above) had to miss the 2012 Olympic Games due to her ongoing conflict with the French Tennis Federation?

Marion Bartoli will most likely miss the 2012 Olympics due to her ongoing feud with the French Tennis Federation. The current tussle stems from Miss Bartoli’s refusal to be coached by the Federation coaches and insistance that her father coaches her during Fed Cup and Olympic competitions. Miss Bartoli was hoping for an exemption from the ITF, but it seems unlikely that she will receive one. Miss Bartoli’s unwillingness to work with the federation and participate in Fed Cup competition throughout the year has deemed her ineligible to compete in the upcoming Olympics. While I am all for a player’s individual rights to choose her coaches, trainers and hitting partners, I will have to disagree with Miss Bartoli in this instance.

The Olympics is an international competition geared towards team competition, with the ultimate goal to achieve a medal for your country. The Games are held every four years so most players have a small window in which to compete. Winning a medal for your country is considered by most tennis players as one of the greatest achievements outside of winning a Grand Slam or the Year-End Championships. You needed to look no further than the celebration of the great Roger Federer when he won gold in the doubles with his fellow country man Stanislas Wawrinka in the 2008 Olympics to see the importance of such an achievement. Here is the great Roger Federer, winner of 12 Grand Slam titles at the time, and he was completely overjoyed that he had won the doubles, not even the singles, which was won by his rival Rafael Nadal.

How about the success of the Williams sisters, who have three gold medals between them, two in doubles and one in singles won by Venus? They are coached successfully by their father to the tune of 20 Grand Slam singles titles.  They have made the Olympics a priority and are very willing to be coached by the USTA coaches. Do you see Roger, Rafa, Venus, or Serena forgoing the Olympics because of a feud with their federation? I think not.

Miss Bartoli’s unwillingness to follow the rules that are adhered to by all the tennis players is no longer considered a feud with the French Tennis Federation, but a lack of national pride that will cost her the chance of winning a medal. A chance that is not farfetched since Miss Bartoli has had success on the lawns of Wimbledon where the Games will be played. Since turning pro in 2000, Bartoli has had her greatest Grand Slam success at Wimbledon, where she reached the 2007 finals en route to beating the likes of Justine Henin in the semi-finals, before running into Venus Williams. I am hard pressed to find a reason why Miss Bartoli and the Federation cannot resolve their issues and move on. Maybe Miss Bartoli is reminded of the history of the games where the Olympian’s father was also honored.

According to historical records, the first ancient Olympic Games can be traced back to 776 BC. They were dedicated to the Olympian gods and were staged on the ancient plains of Olympia. They continued for nearly 12 centuries, until Emperor Theodosius decreed in 393 A.D. that all such “pagan cults” be banned. The official award ceremony would take place on the last day of the Games, at the elevated vestibule of the temple of Zeus. In a loud voice, the herald would announce the name of the Olympic winner, his father’s name, and his homeland. Then, the Hellanodikis (Greek Judge) placed the sacred olive tree wreath, or kotinos, on the winner’s head.