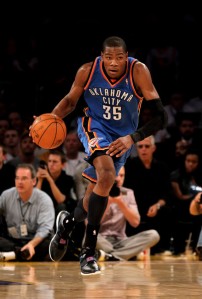 Photo courtesy of zimbio.com. Kevin Durant (pictured above) and the Oklahoma City Thunder appear to be the team that can stop a Miami Heat dynasty.

Arguably the greatest rivalry in basketball dominated the 1980s, with the Lakers and Celtics winning 8 titles between them.  The 90s were defined by “His Airness,” bringing 6 titles to the Windy City, despite taking time off to pursue a baseball career.  In the first part of the 2000s, the Twin Towers put San Antonio on the map, bringing home 3 titles, plus one in 1999.  Then recently, at least for a few years, the Lakers/Celtics rivalry was renewed.  That time appears to be up if the start of this season has been any indication.  Now we have hit a new era.  Will this be a time defined by a rivalry or a dynasty?

Ever since July 8th of 2010, many figured the Miami Heat would become the next dynasty in the NBA.  Basically, the other 29 teams were supposed to be playing for second place.  And the Miami MonStars (Heat) may still bring home multiple titles to South Beach.  But there is another team making some serious headlines out of the Western Conference.  A team that almost turned this rivalry into a reality last year.  I will be the first to say that I wanted to see a Kobe versus LeBron finals last year.  Dallas did not let that happen.  Once the “Lake Show” was eliminated, I began pulling for the young and exciting Oklahoma City Thunder.  Dallas put an end to that as well.

Well this is a new year.  And the Oklahoma City Thunder appear poised to win the West, while Miami is without question the team to beat in the East.  Currently, Miami and OKC are tied for the best record in the NBA.  And considering Miami has received enough media attention since the infamous “Decision” to last a lifetime, lets give the OKC boys some love.

Russell Westbrook is without question the lightning, and Kevin Durant provides the Thunder.  The secret is out regarding the talented group out of Oklahoma City.  Slowly but surely, basketball is beginning to rival football in the Sooner state.  And can you really fault the people?  This team has been absolutely lights out as we gear up for the All-Star break.

Here are a few of their recent achievements.

-72 points in one half against the Celtics.

Now this team is much more than a two-man show.  They have the best bench player in all of basketball in James Harden.  Ibaka is one of the best post defenders in basketball.  The bench is deep and talented.  And did I mention that the average age on this team is 25-years-old (5th youngest in the NBA)?  The four teams with a younger average age are the Warriors, Wizards, Timberwolves, and Kings (all major pretenders at this time).  This young Thunder group seems to really have a great chemistry and should stick together for some time.  If OKC is able to keep the core together, could they be the thorn in the side of the Miami MonStars?  Maybe.

I do know one thing.  The Oklahoma City Thunder have to make you wonder. It appears that a major rivalry is on the way in the NBA rather than what many projected to be a Miami dynasty.

9 responses to “Rivalry or Dynasty?”