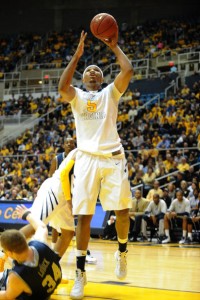 Photo courtesy of zimbio.com. Kevin Jones (pictured above) is your typical "Huggins Guy" and will very likely be a lottery pick at the NBA Draft in June.

Bob Huggins is known for three things by the American public.  Winning, toughness, and of course drinking.  Huggins established himself as one of the elite coaches in America during his sixteen year tenure in Cincinnati.  During that time, Huggins won an astounding 399 games (average of 25 a year), went to three Elite Eights, and of course earned UC their first trip to the Final Four in nearly 30 years.  In addition, Huggins lived and breathed toughness.  This was reflected in how his players approached every game.

Many in Cincinnati grew to love the man often referred to as “Huggy Bear.”  They loved his very casual dress, his temper-tantrums, and of course the fact that he won.  And not only did the fans worship Huggins, but so did his players.  Bob Huggins may not be the best X’s and O’s guy.  He also may not be the best recruiter in the country.  But I can safely say that Bob Huggins is the best coach in America at getting the optimum effort level out of his players on a nightly basis.  There will never be questions about effort and backbone when talking about a player on a Bob Huggins team. Huggins developed players to fit his system.  A good few of these guys are commonly referred to as “Huggins Guys.”  I am talking about players like Kenyon Martin, Jason Maxiel, Eric Hicks, and I could go on in terms of Cincinnati.  From a West Virginia standpoint, I am referring to guys like Joe Alexander, Da’Sean Butler, and this list will continue to grow in time.

The following are the characteristics of a “Huggins Guy.”

Well this year, there is a “Huggins Guy” that deserves to be in the first team All American conversation (I will not say Player of the Year due to WVU being unranked at this time).  If you haven’t figured out who I am talking about at this point, you probably are not an avid follower of college hoops or have not watched West Virginia play one game this year.  Kevin Jones is without question a “Bob Huggins Guy.”

The 6 foot 8, 260 pound stud out of Mt. Vernon is taking on any and all comers.  This guy is simply dominating the Big East, leading the conference in both points and rebounds per game.  Kevin Jones fits the characteristics of a “Huggins Guy” to a tee.  He is strong.  Has great length and athleticism.  He is gritty.  And you better believe he did not just transform into the 20/11 guy that you are watching overnight.  This guy underwent what I like to call the “Kenyon Martin Transformation.”  In other words, he went from being a very good player as a junior, to a can’t miss guy as a senior.

The whole Kevin Jones story is refreshing to me.  It just so happens that Kenyon Martin was the last American born college senior taken as the number one overall pick in the NBA draft.  What ever happened to programs?  What ever happened to four-year players?  I guess we could ask John Calipari and Thad Matta about that.  Either way, it is great to see a guy like Kevin Jones improve each year over a four-year time-period, and turn himself into a lottery pick.

“Huggins Guys” are few and far between these days.  You will not see many four-year projects like Kevin Jones that end up as first-round material come draft time.  So as I mentioned earlier, Bob Huggins is known for three things.  Those would be winning, toughness, and drinking. A fourth should be added.  And that would be developing talent and helping “Huggins Guys” land themselves a job in the NBA.  Got to love the “Huggy Bear.”

2 responses to “A Huggins Guy”