Photo courtesy of zimbio.com. In order for Chicago to make a run at the championship this year, their star Derrick Rose (pictured above) will have to get healthy.

If there is one thing every person in the sports world  know about the Chicago Bulls, it’s that their championship hopes lie squarely on the shoulders of reigning MVP, Derrick Rose. After missing just six games throughout his first two seasons in the NBA, Rose has already missed eight games this season due to turf toe and back spasms. With his lingering back spasms, Rose went to see a back specialist on Monday, who revealed that there was no structural damage.

Rose went on to say, “This back pain should be behind me in a couple of days. I should be back out there in a couple days. I’m going to take my time and be smart.” END_OF_DOCUMENT_TOKEN_TO_BE_REPLACED

How I got to know Doc 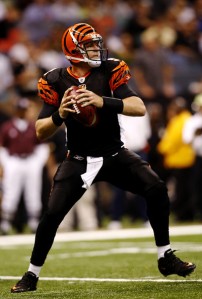 Photo courtesy of zimbio.com. 2008 was not the best of years for Carson Palmer (pictured above) and the Cincinnati Bengals.

Now I want you all to think back to the Bengal days before Big Red and A.J. Green arrived at Paul Brown Stadium and took the city of Cincinnati by storm. A time where flashiness seemed to outweigh heart, and the name on the back of the jersey seemed more important than the name on the front.  It is October 26, 2008.  Ryan Fitzpatrick (alumnus of the same fine academic institution as Jeremy Lin) was filling in for an injured Carson Palmer.  Cincinnati has just lost for the third straight week by 20+ points.  On this particular day, the Who Deys took one on the head at Reliant Stadium to those pesky Houston Texans (sound familiar?).  Cincinnati now finds themselves 0 for 8 on the year and in the midst of another lost season.  People in Cincinnati are already done with NFL football, and their focus has shifted to college football and the upcoming college hoops season.  Any city that is fortunate enough to have a professional football team shouldn’t be finished with America’s most popular sport by the end of October. It just isn’t right.  It is a major problem.

I reached out to Paul a little more than three years ago on a whim in regards to a school project.  My group was tasked with discussing a major problem in Cincinnati.  So naturally, as Cincinnati sports fans, we chose the Bengals as our problem. END_OF_DOCUMENT_TOKEN_TO_BE_REPLACED