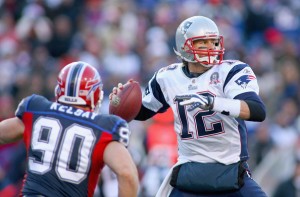 Photo courtesy of zimbio.com. According to our very own Wesley Kaminsky, Tom Brady (pictured above), the Golden Boy, blew it for New England on Sunday.

Let me start by saying I’m not a Patriots fan. I’m an Eagles fan. I’m merely an angry, bitter, disgusted Eagles fan who has tasted playoff failure for my entire life. I’ve witnessed the Eagles lose in four NFC championship games, and one Super Bowl. I was in attendance in Jacksonville during that Super Bowl XXXIX loss to the Patriots. I haven’t tasted a Super Bowl victory, and neither have any Eagles fans. Instead, I’ve had to suffer through watching the Giants win two Super Bowls in the last four years. I didn’t sign up for this.

I’ve taken a couple of days to reflect on what took place in Indianapolis on Sunday night. The more I think about it, the more I cannot believe the Patriots lost.

The more I realize how lucky the Giants got.

The more I realize how Tom Brady blew it. The Golden Boy. END_OF_DOCUMENT_TOKEN_TO_BE_REPLACED