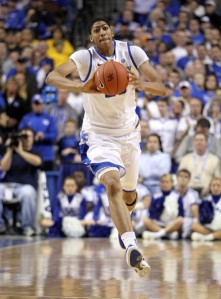 Photo courtesy of zimbio.com. Kentucky super freshman Anthony Davis (pictured above) has quickly become the frontrunner for the Naismith National Player of the Year Award.

For the first time since the beginning of September, there will be no organized football games to speak of.  America’s favorite sport will now go into hibernation until training camp and spring ball begins.  After last night’s “Super” spectacle in which Eli Manning outdid Tom Brady, watching the pigskin get tossed around every Saturday and Sunday will be sorely missed.  But on to the next one.  Here are the events to keep an eye on.

5.  Despite much indecision and turmoil in the form of a 130 day lockout leading up to the 92nd NFL season, the 2011/2012 NFL season did not disappoint by any means.  If anything, the sport grew in popularity.  ESPN proclaimed this the “Year of the Quarterback.”  I think without question, next year should be the “Year of the Tight End.”

4.  Pitchers and catchers begin reporting in the next couple of weeks (February 18th/19th for many).  It seems like just yesterday that the Cardinals shocked the world and sent Tony LaRussa out on top of the baseball world.  The season is creeping ever closer.  Who else is already getting excited?

3.  It seems like New York and Boston are just dominating professional sports these days.  Coincidentally, the top two teams in the Eastern Conference happen to be the New York Rangers and the Boston Bruins.  The most popular sport in American sports has officially gone into hibernation.  We look up North now for the most popular Canadian sport.  Though hockey will not take center stage, perhaps it will get a little larger chunk of the sporting spotlight with football out of the picture.  My attention this week in regards to the NHL is focused on a duel in New York.

New Jersey Devils at New York Rangers:  Remember when this used to be one of the NHL’s great rivalries?  In the early/mid 90s, you would be hard pressed to find two teams that hated each other more.  The Hudson River Rivalry was one of the best in hockey.  If only we could time travel back to the 1994 Eastern Conference Finals.  This series helped Mark Messier become an immortal figure in New York following his Game 6 hat-trick which saved his guarantee.  Well this year, both teams are playing very good hockey.  The Devils thrive off their ability to kill penalties, while the Rangers have turned into the frontrunner in the East.  With the arenas of these respective teams only separated by ten miles, many would love to see these teams meet for a 6th time in the postseason.  Tomorrow night though, the edge goes to the Rangers, who are sporting a very impressive home record and are just a flat-out better team.

2.  So the Western Conference has basically turned into the “Los Angeles Conference.”  Can anyone remember a year when four starters on the same All Star squad came from the same city?  It is hard to believe, but we are already nearing the halfway mark of this shortened 66-game season.  Chicago and Miami appear to be the cream of the crop in the East, while the Thunder are living up to all of the hype and more sporting the best record in the NBA.  This week though, my eyes will be focused on a great matchup in Orlando.

Miami Heat at Orlando Magic:  Since the infamous “Decision,” the “Battle of Florida” has become one of the NBA’s most exciting rivalries.  Both of these teams are widely considered the two best in the Southeast Conference, though Atlanta has turned some heads this year.  The Heat have been playing great basketball as of late, and Orlando has handled business despite the “Dwight Howard Get Me Out of Here Campaign” hanging over their heads.  Though Atlanta is very talented, if “Superman” is patrolling the paint in Orlando, the Southeast will come down to Miami and Orlando.  On Wednesday, I expect a “healthy” Miami team to flex their road muscles against a Orlando team that has struggled to score the ball all season.  Orlando is a very good team, but not a title contender.  The real question is where will Howard be playing on March 16th (day after the trade deadline)?

1.  I think it is safe to say that Kentucky, led by super freshman Anthony Davis is hands down the most athletic team in the nation.  I would even venture to say that this team can get up and down the floor better than some of the current NBA teams.  This Kentucky group will be very tough to beat come March to say the least.  In addition, we continue to witness just how difficult winning on the road is this season.  South Florida, Marquette, and Creighton all learned this lesson the hard way on Saturday.  Here are the games to keep an eye on this week.

-Louisville appears to have finally regained their early season swagger.  Connecticut is still searching, though Saturday’s demolition of Seton Hall was a start.

-The two best in the SEC go head to head at Rupp Arena.  I can guarantee you two things though.  There will be a lot of dunks and a lot of blue.

-Arguably the best rivalry in college hoops.  All eyes will be on Tobacco Road Wednesday.

-Who else is starting to love “Ivy League Fridays” in college hoops?

We have a tie for the top matchup:

-The Buckeyes do not lose at home.  Can Tom Izzo and his surprising Spartans squad change that?

-Two of the “Elite Three” in the Big 12 go to battle at Mizzou Arena in a game that will feature as frenetic a pace as you will see in college basketball.