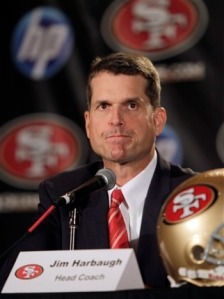 Photo courtesy of inquisitr.com. Jim Harbaugh (pictured above) has pulled a David Blaine like job in San Francisco. Can he get one more win and help the 49ers get to the Super Bowl?

This Sunday is by no means rocket science in terms of the NFL.  Let me clarify any confusion if there is any. If you win, then you’re in.  If you lose, well, you join the rest of America to watch the country’s biggest sporting spectacle on your couch.  At least the commercials for the big game are good right?  All four of the remaining teams are outstanding groups that are still standing for a reason.  28 teams are already making preparations for next year.  This esteemed group of four has their sights set on the present.  They have their sights set on the one and only Lombardi Trophy.

“Tebow Time” may have struck midnight.  And the seemingly invincible team from Green Bay is out, but this weekend will be a treat without a doubt.

-Will Jim Harbaugh continue to shock the world?

–Ray Lewis or Tom Brady?  Which superstar will represent the AFC in Indy?

-Will the Ravens recent inner turmoil cost them a spot in the big game?

The Word:  Who is more stylish, Tom Brady or Terrell Suggs?  Its glamour versus beauty in Foxborough.

Reasoning:  It is another one of those good old “Offense” versus “Defense” battles.  You have two of the greatest players of our generation in Ray Lewis and Tom Brady doing all in their power to will their teams Indy.  You would think I would have learned my lesson last week when “Defense” triumphed over “Offense” in San Francisco.  But I haven’t.  Baltimore is a great team.  But their offense has been in shambles for nearly two months now.  They have inner turmoil.  And they are going to play in a place where New England rarely ever loses.  The difference will be Tom Brady’s ability to make plays and the definite home-field advantage.

The Word:  The matchup of the “surprise teams.”  Most NFL fans nationwide expected Green Bay to be taking on New Orleans in a rematch of the thrilling opening night game at Lambeau.  It didn’t happen.

Reasoning:  What Jim Harbaugh has accomplished in San Francisco is the story of the year in the NFL.  But let’s be honest, the NFL is by no means a league of fairy tale endings.  Ask Aaron Rodgers how that worked out last Sunday.  The New York Giants are not only the hottest team in the NFL, but they are also the most confident.  After going into Lambeau and dismantling the best team in football, the G-Men have no fear.  Both teams have great defenses.  The difference is New York also has an electric offense, featuring arguably the best one/two receiving punch in the NFL today.  San Francisco is back to being a consistent contender though for all of the 49ers die-hard fans.  It just isn’t going to happen this year.