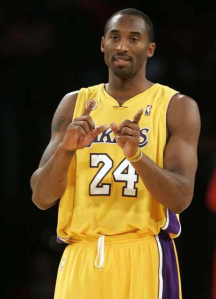 Photo courtesy of latimesblogs.latimes.com. Kobe Bryant (pictured above) has shown no signs of aging after putting up 40+ points for a fourth consecutive game on Saturday. Can he lead the Lakers to a victory in Miami on Thursday?

The clock finally struck midnight on “Tebow Time,” or at least for the time being, and the globe is still spinning.  “Lob City” staked their claim to Los Angeles.  And the 49ers won against an outstanding Saints team in a game that will go down as one of the all-time greats.  The past week, or even the past day for that matter, was classic.  This week should be pretty fun in its own right though.  Here are the events to keep an eye on.

5.  Pitchers and catchers start reporting in 33 days (February 18th for a lot of teams).  MLB baseball is just around the corner.  And the Yankees finally broke their silence on Friday in a big way.  Who else is already very excited for the 2012 baseball season?  Keep an eye this week on what happens with marquee available players such as Prince Fielder, Rick Ankiel, and many more.  Will your favorite team pick up the piece they need to make a deep run in October?

4.  Kobe Bryant has now put up 40 or more points four straight games.  So much for the 33-year-old wearing now.  Any chance he will eclipse his nine-straight games of 40 or more points back in 2002/2003?  In addition, what is the deal with the Miami Heat and the Boston Celtics?  The Heat were a team that many expected to win 60 games in this 66 game strike-shortened season.  They now  have lost three straight games.  Boston has been even worse, losing four straight games.  Times are changing in the NBA.  Both Philadelphia and Indiana appear to be contenders, and the Los Angeles Clippers staked their claim to LA on Saturday night.  My eyes this week are focused on a matchup in Miami though.

Los Angeles Lakers at Miami Heat:  Despite Miami’s recent woes and the Lakers recent loss to the Clippers, this is still a huge matchup.  Any game that features James, Wade, and Bryant is going to provide some fireworks.  No superstar ever wants to back down against a fellow superstar.  The Lakers currently sit atop the Pacific, while Miami is right in the thick of things in the Southeast.  There is one key stat though that will define this James/Bryant collision.  Miami is a very good home team (3 and 1) while LA has not been too successful on the road this year (1 and 4).  Home-court advantage will give the South Beach MonStars the edge on Thursday.

3.  We learned one key lesson this past Saturday.  Even in January, winning on the road is no easy task.  Just ask North Carolina, Michigan State, UNLV, Michigan, and Kansas State their thoughts about this, in that all of these ranked teams lost to lesser ranked opponents on the road this Saturday.  Here are some matchups to keep an eye on this week.

-The Bears bring their undefeated record into the “Big 12 Mecca,” Phog Allen Fieldhouse, as they look to knock off their 3rd ranked opponent of the season.

-Both teams are coming off of losses in the “Battle of Michigan.”  When was the last time that both of these teams were this strong in the same year?

-It is not often that these two powerhouses play each other coming off of losses.

-UNC has not proven their ability to win on the road this season.  With a one and two record in true road games this year (only win coming against UNC-Asheville on November 13th), it will not be easy to knock off the Hokies.

-If Baylor handles business at Kansas tonight, the Bears will roll into this Big 12 showdown with an undefeated record.  The real question is will they leave it unbeaten?

2.  The first Grand Slam of the 2012 tennis season is under way as both the ATP and WTA Tours make their annual visit to Melbourne for the Australian Open.  2011 was a great year for tennis, but 2012 promises to be even better.  Can Novak Djokovic stay atop the Men’s game?  Will the WTA Tour become more predictable, and less like a Nancy Drew novel?  And does Roger Federer have a 17th Grand Slam title in him?  All of these questions and more start to get answered today.

1.  Saturday was the ultimate “Day of the Tight End.” And though ESPN proclaimed this past year, “The Year of the Quarterback,” an argument could easily be made that it was also “The Year of the Tight End.”  Guys like Rob Gronkowski, Jimmy Graham, Aaron Hernandez, and Vernon Davis are redefining the tight end position.  We all are very appreciative of what Tony Gonzalez has done for the position over the past 15 years, but a new age for tight ends has begun with an outstanding young group.  In addition,  how about the play of Justin Smith?  I think Mike Brown and the entire city of Cincinnati is wondering where this playmaking ability was during the first seven years of his career.  By this time next week, we will know what two teams will be playing in the game for all of the marbles on February 5th in Indianapolis.  I will give you a hint.  It won’t be the heavy favorite Green Bay.