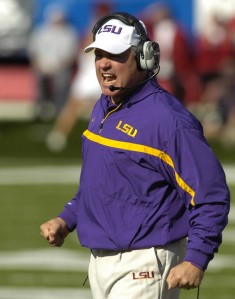 The late-great basketball coach Skip Prosser once told me, “If you can’t be on time, be early.”  Well in this case, I am going to be super early.  The big game, which unfortunately did not end up being “big” by any means, concluded the College Football season on Monday night.  And despite a very disappointing finish to what had been a magical season in Baton Rouge, good things are ahead for the Tigers.  Who really cares if the season just ended, Spring Ball is right around the corner as die-hard fans across the country pray their team will be “the” team in 2012 and early 2013.  Here is an early look ahead.

1.  LSU Tigers:  Do not let Monday’s game take away from what this team accomplished this past season.  Eight wins against ranked foes.  Five of those on the road.  Plus this team returns the majority of it’s vaunted defense, including the Honey Badger and Eric Reid.  In addition, find me a better stable of running backs.   LSU was the nation’s best team in 2011.  They just didn’t finish the job.  Also, next year, their schedule is much more favorable.  The Tide have to come to Baton Rouge and the non-conference slate is not exactly mind-boggling (N. Texas, Idaho, Washington, Towson).

2.  USC Trojans:  Matt Barkley’s return may have come as a shock, but you better believe he will “shock” Pac-12 defenses all year long.  Find me a better returning wide receiver than Robert Woods.  Nobody wanted to play this team in November or December this year.  And the scary thing is they do not lose much off of what was arguably the hottest team in the nation.  So what if Mark Sanchez and Matt Leinart have struggled in the pros, at least their alma mater is back on the map.

3.  Oregon Ducks:  Speed, speed, and more speed.  This team is in the mold of an SEC team that happens to play in the Pac-12.  With the departure of workhorse LaMichael James, the whole nation will get a good look at quite possibly the fastest player in the nation, DeAnthony Thomas.  Don’t be blinded by the cool jerseys.  It’s not all about looks in Eugene.  This team will be a major contender to return to the National Championship Game in 2012.

4.  Florida State Seminoles:  Many jumped on the Seminoles bandwagon a year too early.  I will admit that I was one of those people.  Next season though, will not be about hype.  The 2012 campaign will be all about performance in Tallahassee.    In addition, this team returns nearly all of the parts from the best defense outside of the SEC West (ranked 3rd in defense).  Defense wins championships.  Just ask Alabama.

5.  Alabama Crimson Tide:  The performance Nick Saban’s team put on against LSU on Monday night was one of the ages.  I am not sure if I have ever seen a defense perform like that in college.  Just ask Alabama junior Dre Kirkpatrick who was quote saying, ““The greatest defense in the world … the greatest defense to ever touch the field.” I am not so sure I would go that far, but they were the real deal.  Though they lose a lot from this year’s championship team, the future promises to be very bright for quarterback AJ McCarron and running back Eddie Lacey.

Other Teams worth noting:

Oklahoma Sooners-Will Landry Jones and Bob Stoops finally live up to the hype in Soonerville?

Ohio State Buckeyes-Despite not being bowl eligble, it appears Urban Meyer will have this team poised to play in the National Championship in January of 2014.

Notre Dame Fighting Irish-Brian Kelly typically has a great track record in year three at any school.  Just ask Central Michigan and the University of Cincinnati.