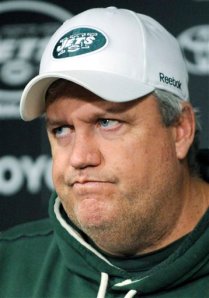 Photo courtesy of bostonherald.com. Rex Ryan (pictured above) is not the happiest of people as we begin 2012. Has he learned any lessons over the course of the past year?

2012 has already begun with a bang.  Football, football, and more football.  Plus some hoops and hockey among other things sprinkled in.  Who else is in BCS Heaven and hyped for the NFL playoffs?  Here are the items that have caught my attention

–Rex Ryan has admitted to possibly not having the “pulse” of his team this season.  Maybe he should have thought about this type of thing before running his mouth.  Rex Ryan has quickly become one of the most villainous figures in football.  If you are not a fan of the New York Jets, you are not a fan of Rex Ryan.  There are not too many people who are neutral towards Rex Ryan.  Every sports fan has a pretty definitive stance regarding the New York football coach. END_OF_DOCUMENT_TOKEN_TO_BE_REPLACED