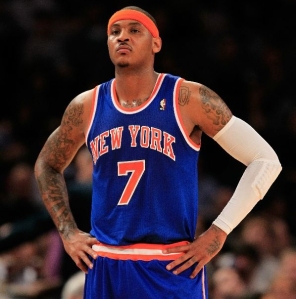 Photo courtesy of iamnba.com. Carmelo Anthony (pictured above) put on a show at Madison Square Garden yesterday. Can he lead the Knicks to a deep playoff run for the first time in over a decade?

The NBA is finally back.  NFL action heads to the final week.  MLB off-season moves continue to occur left and right. And bowl season is finally ready to heat up. The New Year is always an exciting time in general, but it is also a great time in sports too.  Here are the events to keep an eye on this week.

5.  As is the norm during this time of the year, the NHL has gotten lost in the shuffle.  Now with the return of the NBA and the recent onslaught of concussions, expect the NHL to fall even further back on the agenda than normal.  Despite the lack of attention, there is still some great hockey to be played.  This week’s matchup to watch takes place down south.

New York Rangers at Florida Panthers:  It is a good thing that style points do not mean much in professional sports.  Because if they did, Florida may no longer be in first place.  The last time the Panthers took the ice, they took an 8 to 0 beating from the defending champion Boston Bruins.  Plus they are now losers of three straight games.  The Rangers on the other hand, are coming off of a big win against rival Philadelphia and have now won four straight games as they get ready for their “Battle of New York” with the Islanders tonight.  The Rangers live on one of the elite defensive units in the League and a very respectable group on offense led by Marian Gaborik.  Florida is not really too strong in any particular facet of the game.  They are typically good at defending their home ice.  The Rangers are not only hot right now, but they also thrive on the road.  Let the good times roll for New York.

4.  Most attention lately has been focused on the plethora of transactions in the NBA.  Quietly though, the MLB has been playing their own version of “Let’s Make a Deal.”  Do not sleep on the MLB.  Many middle-market teams like the Cincinnati Reds and Washington Nationals are doing all in their power to contend in 2012.

3.  The glamour and glitz of opening night is over.  And it did not disappoint by any means.  Carmelo Anthony and the Knicks appear ready to contend for the first time in a long time  And Miami.  Well the Heat appear to be on a mission to make up for last year’s missed opportunity.  There are multiple games every night this week.  One to keep an eye on takes place in Oklahoma City on Thursday night.

Dallas Mavericks at Oklahoma City Thunder:  A rematch of last year’s Western Conference Finals.  And despite Dallas looking like a JV team yesterday, they are the defending champions and a contender in the West.  I do think that this is the year of the Thunder though (in the West).  Kevin Durant is not only the two-time defending scoring champion, but he also made a major statement at Rucker Park this summer.  Good luck stopping this very young, yet experienced, Thunder group.

2.  Can someone please explain to me why it is called “Capital One Bowl Week.”  Wouldn’t “Capital One Bowl Month” make more sense?  Believe it or not, we are only a fifth of the way through the games.  Yes, just 7 of the 35 bowl games have been played to date.  Strap in, because we will eventually make it to the meaningful of games.  There are 16 bowl games this week.  They are as follows:

1.  Tim Tebow threw two pick-sixes on consecutive plays.  It appears the clock has finally struck midnight on “Tebow Time.”  As we head into the final week of the regular season, eight playoff spots have been secured.  Four remain.  Who will get invited to keep playing?  Week 16 is nearly in the books, but Week 17 is just around the corner.

-Kansas City at Denver (Can Tebow get into the playoffs?)

-Baltimore at Cincinnati (The Bengals control their own destiny)

-Dallas at New York (Giants) (Who will win the NFC East?)