A head scratcher in Cincinnati 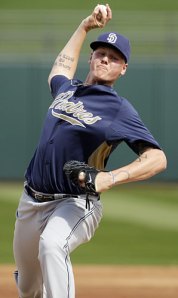 Photo courtesy of sportsillustrated.cnn.com. The Cincinnati Reds just made a major move in picking up Mat Latos (pictured above) in a blockbuster trade with the San Diego Padres. Will the young right-hander live up to the hype in Cincinnati?

I am well aware that being a general manager or the owner of a professional sports franchise is no easy task.  Granted I cannot speak from personal experience, but I can only imagine the difficulties of the job.  The majority of professional sports teams have millions of fans, that live and die on every move their respective team makes.  But today, my beloved Cincinnati Reds made their biggest move of the offseason and it has me scratching my head.

Now this trade to me is a prime example of why the Cincinnati Reds are not ready, and will not be ready for some time to contend for a World Series.  There is no question that the Reds have something good brewing in Cincinnati.  Coming off their first divisional title since 1995, many considered the Reds the favorite to win the NL Central in 2011.  It didn’t happen for a plethora of reasons.  Sadly, the Reds won just 79 games last year despite having a very talented team.

Now I am not oblivious to the fact that the Reds are a middle-market team.  I realize that they will never have a 200 million dollar payroll like the New York Yankees.  Cincinnati is typically in the 70 to 75 million dollar payroll range.  And this is fine.  Teams like the Yankees are able to spend much more money for numerous reasons.  They are in a huge market.  They have a massive regional cable network (YES).  And they are of course the Yankees.

Today’s move by the Reds though just seems preposterous on so many levels (I hope I am wrong).  Sure Edinson Volquez has struggled to live up to the hype since the second half of 2008.  Boy I wish we could turn the clocks back to December 21, 2007. And I also realize that we have Joey Votto (likely for just two more years).  But why get rid of two of our top prospects in Alonso and Grandal?  Jocketty better be sure that Mesoraco is going to play out as this teams catcher for years to come.  Four players, including two of our top prospects and a former All-Star is an extraordinarily steep price to pay for a pitcher who went 9 and 14 last season.  A pitcher who is just 24-years-old and already struggling with shoulder issues.

Now I am by no means naive enough to think that wins/losses is the only stat or even the most important stat to look at when evaluating a pitcher.  Latos had a 3.47 ERA last year, which is very respectable.  Plus he had an outstanding 2.92 ERA in 2009.  He also is still very young.  With just a little over two full years under his belt, this youngster has never thrown more than 200 innings in a season (we hope he goes over 200 every year in Cincinnati).  In addition, both his WHIP (Walks plus hits per innings pitched) and strikeout-to-walk ratios are very respectable.  This kid has stellar potential.  But he also is not completely proven as a top of the rotation type of guy, and already has shoulder problems.

It is no mystery that Cincinnati’s single biggest problem last season was their pitching.  More specifically, the lack of consistency at the top of the rotation.  With the 12th ranked ERA in the National League, it is safe to say that pitching was Cincinnati’s achilles heel in 2011.  In addition, only one guy on the staff had more than nine wins (Latos win total in 2011) last year.  Plus Latos had 67 more strikeouts in 2011 than any pitcher on the Reds roster.  This guy brings a lot of things to the table and potentially could be half of a phenomenal Cueto/Latos duo.

With all of that being said, Walt Jocketty has been a great GM since he arrived in Cincinnati.  He has done everything he has said he would do and more.  He truly has the “Win Now” mentality which we all crave in Cincinnati.  I do think he got a little trigger happy on this deal though.  It seems to me Jocketty panicked a bit, and made a deal without fully thinking it through.  I hope I am wrong, but tonight I am scratching my head.

13 responses to “A head scratcher in Cincinnati”