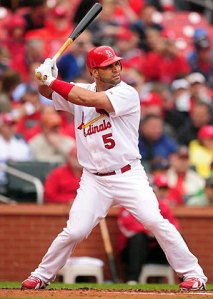 Photo courtesy of sportsillustrated.cnn.com. Do St. Louis fans not realize everything that Albert Pujols (pictured above) brought to the table?

After hearing the news Thursday that Albert Pujols signed with the Angel’s, several headlines caught my attention. By far the most absurd, ludicrous, and shocking reports I saw was the “so what” attitude by a number of Cardinals fans.

Before I get into my rant, let me preface it by telling you a little about my sports allegiances. I am a 22-year-old college student who was raised in north central Ohio as a die-hard Cleveland sports fan. It has been a tortured existence. Cleveland sports have the longest major sports championship drought of any city in the United States. Our last championship triumph was in 1964, when the Browns won the 1964 NFL championship game.  I haven’t been alive the full 46 years since then to understand all the pain, but I have been alive long enough to experience enough agonizing defeats. I’m just old enough to remember the all-star laden Indians teams of the mid 90’s – early 2000’s, who couldn’t ever get over the hump. My only memories of the Browns are their post expansion losing ways. In 2003, our city had a glimmer of hope in someone who was touted as Cleveland’s savior. We all know how that ended. It is safe to say I am a bitter sports fan, which only makes me more incensed when I see a city take a player or team for granted. This is exactly the kind of attitude many Cardinals fans have toward losing Albert Pujols.

I’ll start by saying this is directed more at the fans, not the St. Louis management. From an outside perspective, I can understand the organization having a hard time justifying giving Pujols $25 million a year on the back-end of a ten-year contract, especially in the NL.

When I heard reports that the general sense around the city was that Cardinals fans were happy the team didn’t fold to Albert’s “demands,” I literally could not believe it. If I were a Cardinals fan, I would have wanted the Cardinals franchise to do absolutely anything to re-sign Pujols. My emotions would be alternating between sadness and fury with Cardinals management. For everything he has done for St. Louis, the fans’ support should have been unwavering.

How stupid and spoiled can you be St. Louis? Well, ok, other than Pujols winning two World Series championships for your franchise, and your first since 1982, what else has he done? Oh that’s right, he’s only had the greatest first 11 seasons to start a career in MLB history, is already widely regarded as the best 1st basemen in MLB history, and is one of the best hitters ever to step up to the plate. During his time with your team, Albert put up insane numbers. He’s won the National League MVP three times and has only finished outside the top five in MVP voting just once in his career. He is a nine time All-Star, six-time Silver Slugger, and two-time Gold Glover. Pujols has only hit under .300 and had fewer than 100 RBI’s once in a season (.299 BA and 99 RBI’s). He’s never played less than 140 games in a season, while playing less than 150 games only three times.

Tell me Cardinals fans, what other reasons do you need be convinced Albert was worth keeping? Would it help to know that over the past three seasons Ryan Howard made $10.5 million more than him and Mark Teixeira made over $20 million more? This is all while Pujols put up better numbers.

Maybe it would help to take a step back and realize what Albert has done for the community. Since playing in St. Louis, Albert started the Pujols Family Foundation, which promotes the awareness of down syndrome. His foundation donated enough money to the Down Syndrome Association of Greater St. Louis that they are now able to open an office and hire staff. The Albert Pujols Wellness Center for Adults with Down Syndrome has also been named after him. This just scratches the surface of his philanthropic work within St. Louis.

Albert Pujols should have retired as a St. Louis Cardinal. St. Louis considers itself a great baseball city with an even better fan base. After this Pujols debacle, my opinion of them has definitely been lowered. If I were Pujols, the fans’ reactions would have only further strengthened my belief that I made the correct decision to leave. This is a classic case of not knowing what you have until it’s gone. I just never thought it would happen to a baseball city like St. Louis, involving a player like Pujols.