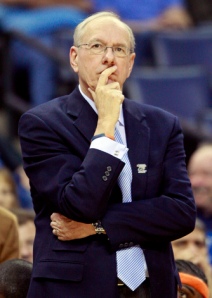 Photo courtesy of nunesmagician.com. In my opinion, Syracuse has no choice but to fire their legendary coach, Jim Boeheim (pictured above).

I love sports just like millions of other people across the globe.  Sports are something that I confide in.  Something that is always there no matter the time of year or the time of day.  There is always some sort of sport going on.  Sports are a universal langauge that everyone has an opinion on.  I have always been a person who believes in the purity of sport.  A person who believed that sports were about competition, sportsmanship, and fair play.  And sure sports do embody these wonderful attributes.  But sadly, especially over the past couple of months, I have realized just how much sports are first and foremost about money, and riddled with scandal.

Now I am not a naive person.  I realize scandal has been going on since the beginning of time and sports have never been above it.  But lately, scandal has smacked the sporting world in the face.  People thought the Tressel bonanza at Ohio State was big news.  But in the grand scheme of things, college kids selling their memorabilia and getting some free tattoos and cash was not a big deal.  Then little Nevin Shapiro shook up the U.  And these horrific acts seemed to be the end of the world.  It wasn’t.  A couple of weeks ago, Happy Valley became an “Unhappy” place.  Jerry Sandusky ruined the name of one of the most prominent figures in sports and brought down a very prestigious academic institution.  Sadly though, the Sandusky case, though horrible, may just be the tip of the iceberg.

–Syracuse basketball has been a powerhouse since before I can remember.  The Orangemen have been one of the cornerstones of America’s best basketball conference, the Big East, since 1979.  Jim Boeheim has patrolled the sidelines in upstate New York for over 36 years as the Head Coach.  Well that era may be coming to a rapid conclusion.  Bernie Fine has been relieved of his duties due to accusations regarding the sexual molestation of multiple children that served as ball boys and in other roles for the team.  I for one am shocked.  Initially, Boeheim came out and vehemently denied that any of these actions occurred. Calling them lies.  I along with most, believed Boeheim.  He “had” always been a role-model of mine.

-Well they weren’t lies.  How is this type of thing happening around college athletics at such major programs?  I am not saying Boeheim knew anything about it.  I am praying that he didn’t.  But either way, Fine was his right hand man, just like Sandusky was for Paterno.  Boeheim made statements initially that he will come to regret for the rest of his life.

“The Penn State thing came out, and the kid  behind this is trying to get money.”

“If [the alleged victim] gets this, he’s going to sue the university and Bernie. What do you think is going to happen at Penn State? You know how much money is going to be involved in civil suits? I’d say about $50 million. That’s what this is about. Money.”

Then Boeheim eventually said the following.

“I deeply regret any statements I made that might have inhibited that from occurring or been insensitive to victims of abuse.”

This statement will be the beginning of the end for Boeheim.

-There is a whole other piece to this story though.  Bernie Fine’s wife knew what was going on.  She did nothing.  This woman should be locked up.  How could a grown woman let something like this go on and not do anything?  I will overlook the fact that she engaged in sexual relations with an 18-year-old while she was married (this is a huge problem in itself).  But she knew young boys were being molested by her husband.  And she did not tell a soul.  How does she sleep at night?

-Sadly, this all must result in one swift action.  Boeheim may have done nothing wrong (I hope).  But he made some strong statements and is responsible for his right hand man of over 36 years.  All leaders are responsible for the people they surround themselves with.  Choose your friends wisely.  Tonight, Syracuse will take the court without Bernie Fine on the sidelines for the first time since March of 1976.

-Soon, they should be taking the court without their fearless leader, Jim Boeheim.

Still some gas in the tank

-The all-time Grand Slam leader is not done just yet.  Roger Federer is not going down without a fight.  A man widely considered the GOAT (Greatest Of All Time) of the tennis world made a major statement on Sunday.  Roger Federer won his 17th consecutive match, and in doing so, picked up his 6th ATP World Tour Finals championship.

-Roger Federer may not have won a Grand Slam title this year for the first time since 2002.  But he demonstrated at the end of the season, that he still has some good matches left in him.  This is not just some run of the mill tournament.  The World Tour Finals is a showcase that features the world’s top eight players squaring off in a round robin format.  Federer gave Nadal a beating similar to the one the Spaniard laid on him at Roland Garros in 2008.  Then he dismantled some of the other elite players in tennis on his way to an amazing undefeated tournament.  Sure Federer did not get a piece of the Djoker, but he made a definite statement.  Do not be surprised to see Federer claim Grand Slam number 17 in 2012.  He may be old.  But he is not dead yet.

-Urban Meyer to Ohio State has finally been confirmed.  And I cannot say that I am surprised (saw it coming in April).  The former University of Florida coach may or may not have health concerns at this time.  But nobody should ever let their health hold them back from pursuing their dreams (when possible).

–Plaxico Burress may not have a clue who Mayor Bloomberg is, but he handled Sunday’s ridiculous situation with grace and class.  He did his talking the best way anyone can.  By handling business on the field.  And as for Stevie Johnson, he has a lot of growing up to do.  Sunday, he cost his team the game with his classless actions and selfishness.  Never talk trash.  Let your performance on the field do all of the talking.