Doing it the right way 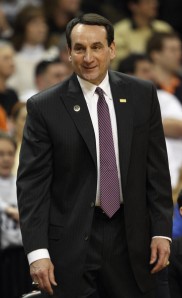 Photo courtesy of zimbio.com. Mike Krzyzewski (pictured above) is now the all-time leader in Division 1 hoops with 903 wins.

Records are made to be broken.  And on this night, another mythical record fell.  Whether you are a fan of Duke or not, you have to tip your cap to Coach Mike Krzyzewski.  The man commonly referred to as Coach K is now the all-time winningest coach in Division 1 NCAA Men’s basketball.  With the still very prevalent Paterno scandal unfolding, tonight demonstrated what doing it the right way is all about.

Coach K played for the great Bobby Knight at Army from 1966 to 1969.  And though he was never a great player, he learned from one of the greats.  Following his very lackluster playing career, Coach K served as an assistant coach under Bobby Knight at Indiana before taking over as the head coach at his alma mater.  After six years at West Point, Coach K took his talents to little-known Duke in 1980.  And well, the rest, is history.

Coach K has now been the head coach at Duke for over 30 years.  During his over three decades running the show, he has transformed Duke from an afterthought, to the “It” program in College Basketball.  With any prominent program or franchise in any sport, comes heavy responsibility, high expectations, and a whole lot of haters.  Coach K has handled the limelight with the utmost grace and class, keeping the same “constipated” look on his face win or lose every night.  In addition, in a time where “controversy” defines college athletics, Coach K has run as clean of a program as there is.  The man’s numbers are absolutely mind-boggling.

-A court named in his honor

I could really go on all night.  But I don’t even think Coach K or the Cameron Crazies would want me to.  It is not about the numbers in Durham. This evening was the perfect setting for NCAA athletics though in what has been a very trying time due to some not so “Happy” events in “Happy Valley.”

Two of the elite college basketball programs in the country going toe to toe in the most famous arena in the world.  Bobby Knight on the call for ESPN.  30 former Duke players in the building.  And a typical businesslike performance from Duke.  Seeing all of the former players in the house tonight truly showed what Coach K has built at Duke.  He has built more than a winning college basketball program.  He built an empire from scratch.  I think Jay Bilas said it best in one of the post-game interviews.  Bilas said, ” I feel like I got in on Microsoft early.”

Bilas hit the nail on the head with that statement.  Duke has become the premier program in college basketball.  The Founder, Editor-in-Chief, and CEO is Coach K.

Whether you like the Duke coach or not, you must commend him on doing it the right way.

7 responses to “Doing it the right way”