Week 11: Will all of the kickers please stand up? 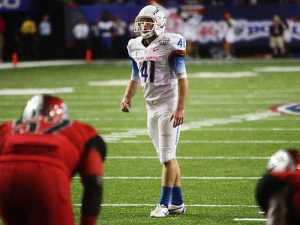 The “Game of the Century” was in the rearview, but that did not affect the caliber of play this week.  Great games from start to finish.  The excitement began on Thursday night with a great ACC battle that lived up to the hype and ended with the marquee event of the week in Palo Alto, where LaMichael James “sprinted” himself back into the Heisman consideration.

Do not underestimate the significance of the kicking game

-Last week’s thriller between LSU and Alabama demonstrated just how important the kicking game can be.  In addition, we all heard about how Derek Dooley and the Volunteer pulled a kicker off of a fraternity house couch just a couple of hours before game time.  There are three key facets to any football game.  Offense, defense, and of course special teams.  Within special teams, kicking is always of the utmost importance.  Yesterday, kicking once again made and broke teams.

-Oops Boise did it again.  Today was the last hurdle of any sorts that Boise State had in terms of completing an undefeated regular season.  Another year, and another botched attempt by the kicker.  Freshman kicker Dan Goodale is now this year’s Kyle Brotzman.  You have got to be kidding me.  A 37-yarder should be money in the bank.  The BCS definitely is breathing a heavy sigh of relief.  And how about the confidence of TCU in going for two with a minute left to take the lead?

-Two years ago, Purdue shocked the Ohio State Buckeyes at Ross-Ade Stadium.  That loss demonstrated that Terrelle Pryor had a long ways to go.  Traditionally, Ohio State is known to have phenomenal special teams and an NFL caliber kicker.  Yesterday, at Ross-Ade Stadium, Ohio State’s normally reliable sophomore kicker had his extra point attempt with under a minute left in regulation blocked.  The first PAT missed on the season shot the Buckeyes in the foot on this day.  The other major football program in Ohio also suffered a heartbreaking loss yesterday due to botched kicking attempts.  Cincinnati showed a lot of heart, especially coming back despite the loss of their quarterback and team leader, Zach Collaros, in the 2nd quarter.  Unfortunately for Cincinnati, their freshman kicker was unable to convert on both of his field goal tries on this day.  This included a 31-yard-attempt that was blocked as time expired, which would have sent the game to overtime.  Never underestimate the importance of the kicking game.

-Penn State came into this week undefeated in Big Ten play and cruising towards a Big Ten Championship Game appearance.  Then everything changed.  In arguably the worst week in school history,  football became of little importance for the Nittany Lions.  And rightfully so.

-The turmoil going on in Happy Valley is not “happy” by any means.  Many Penn State faithful were livid that Joe Paterno was vacant from a Penn State game for the first time since November of 1949.  I for one was not.  They put up a good effort and made the game exciting in the end.  But it is going to be very hard for this team to focus and finish off the year strong with everything going on.  Luckily for the Nittany Lions, no team in the Big Ten’s Leaders Division appears ready to make any real noise.  The loss was a minimal loss in the grand scheme of things.  Do not expect Penn State to finish the year on a high note though.  The focus is not going to be there, nor should it be.

-Texas Tech defeated undefeated Oklahoma just three weeks ago.  Well on this day, they were down 49 to 0 before halftime.  Talk about a change of scenery.  They were absolutely blinded by the “Terrific Trio” of Oklahoma State (Weeden, Blackmon, Randle).  Talk about impressive.  Not only is Oklahoma State’s outstanding offense averaging over 50 points a game on the season, they are also average nearly 400 yards passing a game.

-No this is not a game of Madden.  This is the Weeden, Blackmon, Randle Show.  And it is a good one.  The real question though is how would this team react against a tenacious defensive unit.  We probably will not find out much until they take on the rival Sooners in the season finale.  But does Oklahoma’s defense really compare to that of a LSU or Alabama?  We may not find out if the Cowboys are the real deal until January 9th the way things are going.

3 responses to “Week 11: Will all of the kickers please stand up?”