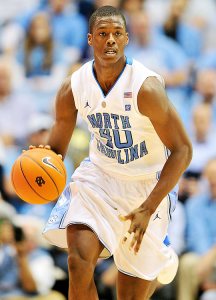 Here is my top five:

-As if this was really a question.  This team went all the way to the Elite 8 last March.  The scary thing is they got better, returning all five starters from a year ago.  Harrison Barnes will likely be a first team All American this year and lead Roy Williams’ crew to Bourbon Street.

-How many of you watched the McDonald’s All American Game back in March?  Well if you did, you got a great preview of what to expect in Lexington this year.  Kentucky shocked the world in making the Final Four last year.  And after holding on to the majority of their talent outside of Brandon Knight and DeAndre Liggins, Calipari appears to have the most talented group of his career.

-I know that I guaranteed a Final Four for OSU last year.  I was wrong.  Though I will admit that I feel like the Buckeyes were the best team in the nation and would have defeated Kentucky 9 out of 10 times last year.  Either way, Jared Sullinger returned to Columbus.  With the return of the nation’s best big man, Thad’s team has a real shot to go the distance.  Also do not sleep on William Buford’s mid-range expertise and the expected emergence of Deshaun Thomas.

-Many were dissapointed in the way things shook out for a Duke team with very high expectations last year.  The way Arizona steamrolled Coach K and the Blue Devils demonstrated how March Madness is all about which team gets hot at the right time.  Despite the loss of Nolan Smith, Kyle Singler, and Kyrie Irving, I have a lot of confidence in this team for one reason.  Austin Rivers.  This kid may be the ultimate “Diaper Dandy” this year.

-I had to place the defending champions in the top 5.  Despite the loss of their heart and soul (Kemba Walker), this team still returns a very talented group.  In all honesty, this group appears to be more talented than last year’s National Champions.  Is Jeremy Lamb ready for the limelight?  If he is, the Huskies should roll deep in March.

My sleepers to make a Final Four run are Vanderbilt, Syracuse, Louisville, Xavier, and Florida.

1.  Though the majority of the NBA Lockout has been bad, it did lead to one good thing.  College hoops should be at the highest level it has been since the infamous one-and-done rule was established in 2005.  With players such as Jared Sullinger, Harrison Barnes, Perry Jones, Jeremy Lamb, Terrence Jones, and others staying in school, the level of play should be as high as ever.

2.  Stemming off of my last point, it appears that for the first time in a good few years, there will be a couple of “elite” teams in the college basketball stratosphere.  The Tar Heels and Wildcats appear to be a step above the rest.  Whether you are a fan of either of these tradition filled programs, your eyes will be glued to the television set when they take the court.

3. The nation’s most storied programs really seem to be back on the map.  UNC and UK top the polls and appear there to stay.  Plus UCLA and Arizona are back in the top 20.  Do not sleep on either of these team to make some real noise in the Pac-12.

4.  The Big East appears to be the nation’s elite conference as usual.  And though many people question all of the bids bestowed upon this power-conference come March, how can you really question a conference that produced a national champion who went 9 and 9 in conference play?  Save the criticism.  If you want my theory on why the Big East sometimes underperforms in March, read this.

5.   Robbie Hummel is back in action.  After two devastating knee injuries, one of the nation’s elite players will finally be able to take the floor for his senior year.  I know I am pulling for the guy to have a great year.

National Player of the Year:

Strap in for what should be another great year of College Basketball.  It is going to be, “Totally awesome baby with a capital A!”