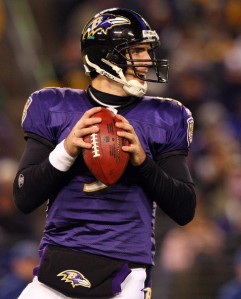 Photo courtesy of zimbio.com. The often criticized Joe Flacco (pictured above) was the shining star of Week 9. Is he finally ready for stardom?

Out of every week thus far, Week 9 provided the most drama for the 2011 NFL season. Heading into the week, the slate was highlighted by the Giants-Patriots, Ravens-Steelers, and Bears-Eagles. And I must tell you, they did not disappoint. Both Eli Manning and Joe Flacco threw touchdowns with under 20 seconds left to win, shocking the Steelers and Patriots. The Eagles, after a dominating 34-7 win against the Cowboys took a huge step backwards, losing to the Bears 30-24. Andy Reid, the pressure is back on you. That loss was inexcusable. END_OF_DOCUMENT_TOKEN_TO_BE_REPLACED