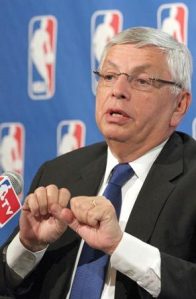 Photo courtesy of mysanantonio.com. David Stern (pictured above) was not well regarded before the recent labor issues. Pretty soon, he may be one of the most hated figured in sports.

The “Game of the Century” has come and gone.  Another great week of NFL football defined by nail biters is nearly in the books.  And the NBA does not appear to be any closer to starting the long-awaited 2011/2012 regular season.  The sporting world was wild last week, but this week is sure to be top-notch as well.

Here are the events to keep an eye on this week.

5.  The NASCAR Spring Cup Chase for the Cup has come down to the final two races.  It is hard to believe, but in a year full of uncertainty and surprise in the sport, it seems it will all be decided between Carl Edwards and Tony Stewart.  Does anybody else miss Jimmie Johnson at the top of the sport already? Who are you taking as they head to Phoenix this weekend?

4.  Finally an ultimatum has been made in the NBA negotiations.  Sadly, at this point, it appears that the ultimatum is not going to finish the deal.  It might actually make talks sour even more.  In this latest deal proposed by the owners, which will remain on the table until Wednesday, the owners proposed 51% of Basketball Related Income (BRI) to go to the players.  The players aren’t taking it, saying that in actuality, it is 50.2%.  Unfortunately, if the players do not accept this deal, the owners are going to move the players BRI down to 47% in the next deal.  Last week I definitively thought that we would at least see part of the season.  Now I am doubting it.

3.  The MLB year always ends with a bang in the form of the Fall Classic.  And this year, the Fall Classic certainly did not disappoint.  But as in every professional sport, once the championship concludes, the game of musical chairs in terms of players, coaches, and ownership begins.  And this year is no different.  The Los Angeles Dodgers are seeking new ownership.  Both the Cubs and Cardinals are in search of new managers.  And the free agent market is absolutely booming, highlighted by starts like Albert Pujols, Prince Fielder, Jose Reyes, and “Big Papi,” David Ortiz.  Keep an eye out, because it could get wild.

2.  The “Game of the Century” has come and gone.  But there is still plenty of College Football to play as we head into Week 11.  We did learn one thing last week from the primetime games.  The SEC is dominated by defense, while the Big 12 has become an offensive highlight reel.

1.  America’s most popular professional sport regains center stage in the wake of College Football’s one versus two monumental showdown.  Eli has shocked New England, again.  The Tebow talk is ready to hit the airwaves with a vengeance.  And the Cincinnati Bengals have won 5 straight games for the first time since 1988.  Week 9 is nearly in the books, but Week 10 is just ahead.

-Pittsburgh at Cincinnati (One of football’s best rivalries)