Week 10 lived up to the hype 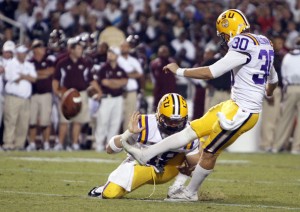 Photo courtesy of zimbio.com. In the "Game of the Century," LSU kicker Drew Alleman (pictured above) ended up being the difference maker.

Though Week 10 centered around one battle of College Football’s goliaths, the overall matchups were not too shabby.  There were great games all across the land, highlighted of course by the showdown in Tuscaloosa that lived up to the hype.

Game of the Century lived up to the hype

-If someone would have told me that the Alabama/LSU game would have ended in a score of 9 to 6 before last night, I would have shrugged my shoulders.  I would have expected a disappointing tussle where nerves got the best of these two powerhouse squads.  But I can safely say that last night’s 9 to 6 overtime warfare lived up to the hype.

-It was a great game.  Now was it a game for the ages?  No it was not.  Unfortunately, it is still only Week 10 of the season and Alabama/LSU is not the caliber of rivalry that OSU/Michigan or Auburn/Alabama are.  But you better believe that these two teams that battled it out in Tuscaloosa are the two best teams in the land.  If you put Alabama’s front with LSU’s secondary, you would have an upper-tier NFL defense in the present.  Both defenses were absolutely outstanding in every sense of the word.

-Alabama in my opinion outplayed the Tigers last night.  But the difference in the game was special teams.  More specifically, kicking.  You would think the Crimson Tide could get a capable kicker for a game of this magnitude.  Nerves or no nerves, two of six is unacceptable.  LSU’s junior kicker on the other hand was a perfect three for three and their outstanding punter (Brad Wing) continued to demonstrate why he is the best punter in the SEC, and quite possibly the entire country.  Football is truly a game of inches.  And nights like last night, where two outstanding and basically evenly matched teams go to war, the little things will determine the outcome.  On this night, it was the kicking game.  I wonder if there is anyone on Bama’s campus who would like a tryout to be the team’s kicker for next week’s game at Mississippi State?

-Louisville shocked the majority of the country yesterday with a big-time road victory over a heavily favored Mountaineers squad in Morgantown.  Charlie Strong, the former Broyles Award nominee for the top assistant football coach in all the land has continued his success as a Head Coach.  In year one at Louisville, he took baby steps, and led Louisville to the Beef ‘O’ Brady’s Bowl.  Glimpses were shown throughout the course of his debut season.

-Well this year, 2010’s improvement appears to be no fluke.  Strong has Louisville playing outstanding football with an outside shot at winning the Big East title this year.  The Cardinals have now won three straight games, after losing their conference opener against Cincinnati.  And the scary thing is not only does the defense continue to play well, but the offense is finally getting it together.  True freshman quarterback, Teddy Bridgewater, appears to finally be a guy who is starting to get it.  And if Bridgewater gets it, the true freshman out of Miami could have some very successful years in Louisville.  Do not sleep on Charlie Strong.  Even if this team does not finish in the top couple of the Big East this year, the future appears to be very “strong” for Louisville football.

Hoke with a choke?

-Michigan laid an egg at Kinnick Stadium yesterday in Iowa City.  The Hawkeyes are a solid team, and Kirk Ferentz is one of the nation’s top coaches, but yesterday’s Wolverines performance was inexcusable.  And despite playing awful for over three quarters, the Blue still had a great shot to at least send the game to overtime.

-Michigan drove all the way down the field to the Iowa three yard-line with 16 seconds left in regulation.  It appeared that Robinson, who had a somewhat average day by his standards, was going to give the Wolverines a chance to steal this one on the road.  But then the unthinkable happened.  The Wolverines were stuffed on four consecutive plays.  And none of the plays were direct QB draws to Robinson.  Robinson is the best scrambling quarterback in all of the land and probably the most mobile quarterback in Big Ten history.  Let your playmaker make a play man.  I realize that the lack of timeouts was a hindrance, but I still do not agree with the play calling.  You have to go with your bread and butter at crunch time.  Hoke and the Wolverines did not yesterday afternoon.