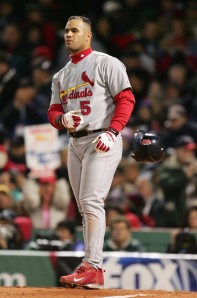 Photo courtesy of zimbio.com. Albert Pujols (pictured above) is doing all in his power to capture his second ring.

Albert Pujols did his best Reggie Jackson impression on Saturday night.  The matchup the entire country has been waiting for in the College Football world is finally set for November 5th (with both powers coming in unbeaten).  And Carson Palmer has returned to the gridiron.  Last week was exciting, but do not sleep on this upcoming week.

Here is what you should keep an eye on in regards to the sporting world.

5.  The final documentation will be completed this week in regards to  the NBA world tour.  And though this is not all that exciting, at least it means some basketball featuring many of the NBA’s brightest stars is going to be played somewhere.  Though we all would much prefer to watch Kobe and Lakers take on LeBron and the Heat on the East or West coast, beggars can’t be choosers.  This is what the sad situation has come too.  Keep an eye on the developments in regards to the six-game, four-continent exhibition tour featuring 18 of the NBA’s elite players.  The tour is expected to start on October 9th.

4.  Phil Kessel of the Toronto Maple Leafs has been simply sensational throughout the first couple of weeks of the NHL season.  The Maple Leafs right wing has been solid during the first five years of his career, which has featured time spent with both the Bruins and the Maple Leafs, but this year he looks to be on a mission to track down the Hart Memorial Trophy (NHL MVP).

This week’s matchup of the week features the rising star Kessel as he leads the first place Maple Leafs to Philadelphia to take on a very talented Flyers team.

Toronto Maple Leafs at Philadelphia Flyers:  Any game that features Phil Kessel this year is going to be exciting.  The man is on a mission.  The Flyers feature a pretty solid youngster in their own right, Claude Giroux.  Though missing some teeth, Giroux can really play as well.  Is Toronto the real deal after failing to make the playoffs last season?  We will begin to find out after watching how they deal with the defending Atlantic Division Champion Flyers and their very solid offensive attack.  Luckily for Toronto, the Flyers have really struggled at home this year.  And that will be the difference tonight as the Maple Leafs, ride their rising star Kessel to a big early season victory.

3.  As I mentioned before, the matchup of the season is set to take place on November 5th.  The two best teams in the country, who also happen to both reside in the SEC West, will go to battle in Tuscaloosa.  Sadly though, that game is not this weekend, in that both teams have a bye.  In addition, Brian Kelly was unable to hold onto the “Luck of the Irish” for a 5th consecutive week, as ND got defeated by their old-time rival, USC on Saturday night.  And though there were many blowouts this past weekend, I feel like the “Kirk Cousin’s Hail Mary Play” made up for anything lost in the other games.  This may be the play of the year thus far.  Talk about a wild ending.

-Oklahoma at Kansas State (Big 12 showdown of the unbeatens)

-Stanford at USC (How “Lucky” will USC be at home?)

2.  The defending champion Packers continue to roll as they head into their bye week with an unbeaten 7 and 0 record.  Detroit now is in the midst of a losing streak.  And Carson Palmer’s return to the gridiron was less than ideal in Oakland.  Week 7 of NFL football is nearly complete, but what should be a great Week 8 is right around the corner.

1.  The Fall Classic trudges on to Game 5 in Arlington tied at two apiece.  How much gas is left in the tank in terms of the Rangers bullpen (Holland’s great performance last night helped)?  Will the “Machine” continue playing like the “Machine?”  And how many moves will Tony LaRussa make during the course of the rest of the series?

All of those questions and more will be answered as we conclude the 2011 MLB Playoffs this week.