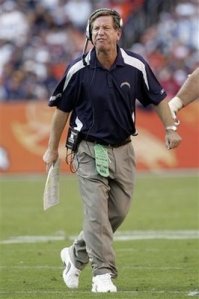 Photo courtesy of thesportstalkers.com. Can Norv Turner (pictured above) win the war of words with New York Head Coach Rex Ryan via a victory on Sunday?

We learned a lot in Week 6.  First of all the Lions are not invincible.  Secondly, sometimes the antics of coaches can become far larger than the actual outcome of a big time game.  Thirdly, Aaron Rodgers and the Packers are just as good as advertised.  And lastly, the Cincinnati Bengals, who many expected to be highly involved in the “Andrew Luck Sweepstakes,” are now 4 and 2 heading into the bye week.

After Week 6, here is the scoreboard.

-The Word:  Once again the coaches have become bigger than what could be a possible postseason matchup.

-The Word:  Both of these heavily hyped teams showed what they are capable of last week.  Who will keep it rolling in London?

-The Word:  Can John Beck take advantage of a major opportunity against a vulnerable opponent?

-The Word:  Though Atlanta has the potential to be a very good team, can you really see the Lions dropping two straight games at Ford Field?

-The Word:  Can Seattle and their anemic offense repeat the astonishing show they put on at the Meadowlands in Week 5?

-The Word:  The Broncos head to Florida and wouldn’t you know the former Florida “God” will be in the starting lineup.

-The Word:  Despite a plethora of injuries, this game is a must win for the Texans who are looking to prove that they are finally ready to take the next step.

-The Word:  Who else is excited to see Carson Palmer back on the field?

-The Word:  Best of luck to Kevin Kolb in dealing with the outstanding Pittsburgh pass defense.

-The Word:  If Minnesota plays like they did last week, the Packers may put up 40…before halftime.  “Ponder” that for a moment.

-The Word:  America’s team has shown time and time again that they cannot win close games.  Luckily for them, this game should not be close.

-The Word:  Normally people get extremely excited to watch two of the best quarterbacks in football go toe to toe when these teams match up.  I am not sure anyone is excited to watch Brees match up with his fellow Purdue alumnus, Curtis Painter.

-The Word:  These are two teams heading in very different directions.  At least we have a good chance to listen to Ray Lewis mic’d up.

-Both of these teams have very high expectations.  Both will consider this year a major dissapointment if they do not roll deep into the playoffs.  In addition, both have very high-profile coaches. And as usual, Rex Ryan has stolen the show with supposedly “harmless” comments.  Ryan loves to stir the pot on a weekly basis.  If only he had a ring or two to back up the talk.

-The Jets have been highly disappointing this year.  They no longer feature one of the League’s elite ground attacks.  In actuality, they are one of the League’s worse rushing teams.  In addition, their once very feared defense is no longer so intimidating.  They have not proven that they can stop the run.  The Chargers on the other hand have been very solid across all three major phases of the game as expected.  New York has two things in their favor heading into Sunday though.  Number one this game is at home.  Number two, this is almost a must win game.  Sadly, must win or not, I do not see them being able to keep up with a very balanced San Diego squad.

Stat of the Week:

-Most of the attention regarding the Chargers/Jets game has been focused on the trash talking fest between Rex Ryan and Norv Turner.  And though I do not condone trash talking, Ryan has as many playoff wins as Norv Turner in half the appearances.  As a head coach, Ryan has been to the playoffs two times and has a record of 4-2.  Norv Turner on the other hand has been to the playoffs four times as a head coach.  He has a record of 4-4.

CV3:  Will Broncos fans get what they want from Tebow? I believe he will bring a higher level of intensity and energy to that team in his first start. He may not be the most fundamentally sound quarterback, but he does know how to win. Will Broncos fans get excited about Tebow or the Luck sweepstakes after this week?

CB:  Carson Palmer with the RAIDASS. Who would have ever thought this would happen? I can’t wait to see how Carson looks in his first game back since the end of last season. With the Raiders sitting atop the AFC West, I look for the Raiders to look explosive, especially with their balanced running attack.

DC:  The big news was made in Oakland this week as the Raiders gave up two high draft picks to get the washed up Carson Palmer.  It seems as though Mike Brown struck gold for the Bengals.  But Palmer gets a horrific Chiefs squad in his first game back.  I am intrigued to see if Palmer and his sub-par wide receivers can put up number on KC.  I think Oakland wins despite a less than stellar day from Palmer, 24 to 16.

TSK:  Once again Tim Tebow Nation will whine that the attention has been taken off of their “God.” It is a shame that Tim Tebow will finally get to start the same week that Carson Palmer makes his debut in Oakland.  The professional life of Tim Tebow is not an easy one (just kidding).