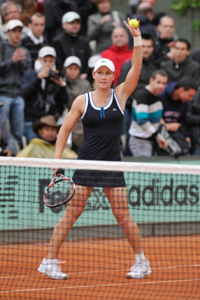 Photo courtesy of thetennistimes.com. Samantha Stosur (pictured above) shocked Serena Williams today in the finals of the US Open.

Everyone was already looking ahead to Monday’s Men’s US Open Final.  Today’s Women’s final was supposed to just be an afterthought.  We thought we had seen it all with Djokovic shocking Roger Federer, coming back from two sets down, and two match points down.  But the fun continues.

So my question for you all today.  What was the bigger shocker?  Djokovic’s unthinkable comeback or Stosur’s shocking upset?

Let me try to paint both of these remarkable and improbable events into perspective for you.

Serena Williams was truly dominant all tournament (until today).  Not only did she not drop a set in any of her first six matches, she only dropped a total of 29 games.  To put that into simple terms, she wasn’t just winning, she was dominating.  It was all but a foregone conclusion that Serena would end the day with her 14th Grand Slam Title.  Plus Serena was already a three-time US Open Champion with a plethora of big match experience.  Instead though, little known Samantha Stosur, an Australian who has been on the tour since 1999, knocked off the 13-time major champion Serena Williams on her home turf.

To give you a little bit of background on this year’s Women’s US Open Champion.  Samantha Stosur is currently the 10th ranked player in the world (that will change).  She reached her career high ranking of number four in the world earlier this year back in February.  She had never won a Grand Slam Tournament before today, but was the runner-up at the French Open last year.

Yesterday, Novak Djokovic appeared to be in big, big trouble.  And that may even be an understatement.  Roger Federer appeared to have time traveled back to his prime and was playing outstanding tennis.  In the Round of 16, he hit 42 winners to his opponents (Juan Monaco’s) 4.  Then in his quarterfinal match, he put on an utterly dominant performance against a man who had his number all summer, Jo-Wilfried Tsonga.

But Novak Djokovic has been having arguably the greatest year in tennis history.  He is now 63 and 2 on the year.  Djokovic has won nine titles, two Grand Slam titles, and is simply rolling (all this year).  The hole that the number one player was in yesterday though was definitely not one that appeared to be an easy task to climb out of.  Federer, the man who many call the GOAT (Greatest of All Time), had a career record of 182 and 1 in Grand Slam matches where he led two sets to none (now 182 and 2).  In addition, Djokovic had only climbed out of a two sets to none hole once at a Grand Slam.  Now he has twice.

I do know one thing.  New York City is in utter shock right now and has to be extremely excited for tomorrow’s Men’s Final, a rematch of this year’s Wimbledon Final.