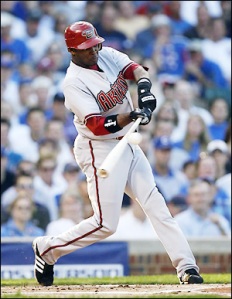 Photo courtesy of astrobrit.blogspot.com. Justin Upton (pictured above) is finally living up to the hype and is leading Arizona towards what would be a very surprising playoff appearance.

All season we have been deceived.  The media and press have tricked us all into believing that the Indians and Pirates were the feel good stories in the MLB this year.  I hate to say it, but the real feel good story is unfolding out West (sorry Midwest fans).

A team that lost 97 games last year was not expected to make any noise this year.  A team that has lost a combined 189 games the past two years definitely was not expected to be a contender.  Of course I am talking about none other than the Arizona Diamondbacks.  Arizona currently finds themselves ahead of the defending champions (San Francisco Giants) in the NL West as we head towards the home stretch.  Arizona has not made the playoffs since 2007, but the prospects are looking as promising as ever this year for a return trip to postseason play.

Only two teams in MLB history have lost 97 games and then made the playoffs the following year.  One of those teams was the Atlanta Braves in 1991.  The other, none other than the Arizona Diamondbacks in 1999.  Can Arizona repeat the same unfathomable feat 12 years later?

I see no reason why they can’t.  Unlike the other “feel good” teams (Pirates and Indians), the Diamondbacks are surging at the right time.  In addition, Arizona has a +27 run differential, while Pittsburgh’s is a weak -35 and Cleveland’s is a very mediocre +2.  Run differentials generally are a very foretelling sign on if a team is the real deal.  Just ask the Yankees, Red Sox, and Phillies about amazing run differentials and how that is working out for them.

By no means did I see this Arizona run coming.  But that is why it is a feel good story.  Most feel good stories are a surprise to the public.  The Yankees making the playoffs is never going to be a feel good story in this day and age.  People expect it.  What would the playoffs be without the Pinstripes? Nobody was expecting Arizona, a team coming off 97 and 92 loss seasons respectively to be in the conversation.

Well they are not only in the conversation, they appear ready to have a real voice in who does what come October.

So do not focus all of your attention on Cleveland or Pittsburgh, the real feel good story in baseball this year is unfolding in Phoenix.

2 responses to “The real feel good story in baseball”