Isner: The “it” American tennis player 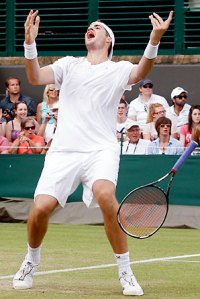 Photo courtesy of SI.com. John Isner (pictured above) is best known for an epic first round match at Wimbledon in 2010. Could he be the new American "it" player?

After being spoiled by the McEnroe/Connors era, and then the Sampras, Agassi, Chang, Courier era, no American has stepped up to the plate.  Different players have become the “it” guy of the moment.  The guy that many hoped could be the next great American Grand Slam Champion.  But none of the “it” guys have lasted the test of time. END_OF_DOCUMENT_TOKEN_TO_BE_REPLACED

Earlier today, Merril Hoge gave an assessment of Tim Tebow that was not shedding Urban Meyer’s favorite son in the most positive of lights.  Hoge gave his honest opinion, and his opinion was not exactly complimentary regarding the former Gator star.  And to be entirely honest, I got to side with Hoge on this one.  He is an NFL Analyst.  His job description is to give his opinion and share it with the public.  This is the real world of media.  There is no sugar-coating involved in this business.

I will admit that I have never been the biggest Tim Tebow fan.  This in large part was because he laid one of the most vicious beatings I have ever witnessed in person on my favorite college football team a couple of years back in the Sugar Bowl. Tim Tebow seems to be a great person.  Or at least from what I can tell.  He appears genuine, philanthropic, intelligent, and just an all around awesome guy.  And these are all important qualities.  It is good to know that Tim Tebow is a great person.  But none of that directly translates towards being a good quarterback in the NFL.

Words that have been used while discussing Tim Tebow today from various media forums:  “Awful, worse, half back, tight end, and project.” END_OF_DOCUMENT_TOKEN_TO_BE_REPLACED