An ode to Randy Moss 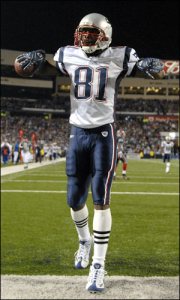 He runs fast and catches balls.

Shame, he was lazy.

Randy Moss was largely unstoppable during his 13-year NFL career.

Defenses changed schemes because of the wide receiver and still Moss would zoom past members of the opposing secondary for a score.

His coaches tried to reign in his vivacious personality and still Moss managed to dictate how and when he was going to play, or otherwise scorn a franchise.

The NFL attempted to punish Moss through his pocketbook, but you knew Moss was still going to be able to take care of his fines with “straight cash homey.” END_OF_DOCUMENT_TOKEN_TO_BE_REPLACED

Photo courtesy of http://www.nflgridirongab.com. Randy Moss (pictured above) one of the all-time great wide receivers, decided to hang up the cleats and retire yesterday.

Sure last week was absolutely ludicrous between all of the transactions in the MLB and NFL. Well the pace will not slow up by any means.  Here are the topics that have caught my attention.

After a very up and down career, though predominantly up, one of football’s greatest wide receivers of all time is calling it quits.  Many headlines have exclaimed “No Moss.”  And I must say, I tip my hat to a man who normally has struggled to handle his business off the field and in the locker room frequently throughout his career.  It is few and far between to find athletes these days who know when the time is right to walk away. END_OF_DOCUMENT_TOKEN_TO_BE_REPLACED