Bartering for Carlos Beltran: Why the Reds should and shouldn’t trade for the Mets outfielder 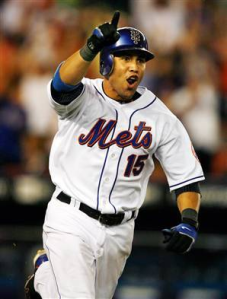 Photo courtesy of sportsblogs.star-telegram.com. Should the Reds go after Mets slugger Carlos Beltran (pictured above)? Our own Grant Freking weighs in.

Since the Mets are in Cincinnati for a four-game series starting Monday night, now seems like a perfect time to examine whether Reds general manager Walt Jocketty should pull the trigger on a deal for Carlos Beltran.

Why the Reds should: There’s no question Beltran is the best hitter available. He’s actually been healthy this season, playing in 96 of a possible 101 games before Monday night’s game. That time on the field is reflected in his on-field production, which is his best since 2008: a .291 average, 15 home runs, 64 runs batted in, and a .910 OPS.

The switch-hitting Beltran would give the Reds an immediate boost in the middle of the lineup and he can still play very good defense in a corner outfield position. Also, he has a history of producing in the playoffs. Beltran is tied with Barry Bonds for hitting the most home runs in one postseason, having thumped eight during the 2004 playoffs with the Astros. In 22 career playoff games, he has a .366 average, 11 home runs, 19 runs batted in and a 1.302 OPS. Acquiring Beltran would also take considerable pressure off Joey Votto, Brandon Phillips and Jay Bruce, the three men most responsible for driving in Reds’ runs.

Why the Reds shouldn’t: Beltran is 34 and a free agent after the season. According to Fox’s Ken Rosenthal, the main reason the Mets have offered to pay the remaining $6 million on Beltran’s contract is they expect to rake in a few high-end prospects in return. Also, the team that trades for Beltran won’t be able to receive draft-pick compensation if he decides to leave said team in the offseason.

In my opinion, in order to acquire Beltran, the Reds would likely have to part with one of the following starters: Mike Leake, Homer Bailey or Travis Wood. Also, the Mets would likely also ask for a top position player prospect such as Yonder Alonso or Devin Mesoraco and could ask for another Double-A or Single-A prospect. That’s a large haul for a rental outfielder who will almost certainly depart after the season.

The Sports Freak’s analysis: I’m still undecided. I’m in the camp that unless Beltran’s trade value suddenly shrinks, it’s not worth the Reds mortgaging a handful of their top prospects for someone who could play as little as two full months in a Reds uniform. Then again, trading for Beltran could potentially solve the Reds’ cleanup woes, allowing Phillips to slide back in his natural No. 2 spot in the lineup and give the order stability.

Marching out a one through eight of Drew Stubbs, Phillips, Votto, Beltran, Bruce, Scott Rolen, Ramon Hernandez/Ryan Hanigan, and Zack Cozart would give the Reds a balanced lineup that could lead to more on-field consistency from a team that has been wildly inconsistent all season. But is trading for Beltran, a player who likely would spend a maximum of three months in Cincinnati, worth giving up a handful of players that could make tangible contributions to the club for years to come? That’s the question Walt Jocketty is probably asking himself right now. I would love to be in his position. We’ll have to wait and see.

One response to “Bartering for Carlos Beltran: Why the Reds should and shouldn’t trade for the Mets outfielder”