Can Moss still be a boss? 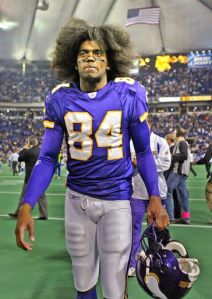 Just as recently as two weeks ago, there was much speculation about a big time aging and often troubled wide receiver (Terrell Owens).  Following knee surgery, many questioned if the future Hall of Famer would be an asset to a franchise if and when football started up again.  Well now there is talk of another future Hall of Fame receiver.  The only difference is this guy is a few years younger and not coming off of an injury.  But it is a similar story outside of the knee injury.

Can Randy Moss still be a boss in the NFL?

At a time, Randy Moss was unquestionably considered the best receiver in the NFL.  There were no question marks.  Sure Moss has had his occasional locker room mishaps or off field miscues, but this guy could play.  He was just a freak athlete who could score on any given play.  The guy put up an astonishing 17 TD’s at a rookie.  He has scored over ten touchdowns in eight different seasons and gone for over 1,000 receiving yards ten times.  When Moss is motivated and focused, he can do almost anything on a football field.  Generally the rule of thumb has been, “If and when Moss wants to play, he will play.  If not, sorry for your luck.”

According to various sources, Moss’ agent says that his client is in “freakish shape.”  Is Joel Segal (Moss’ agent) pulling a Drew Rosenhaus?  It is hard to believe any of these agents.  They are all extremely intelligent and can lie with the best of them.  So on one hand maybe he is telling the truth.  Perhaps Moss has finally come to his senses and realizes that he still wants to play football at a high level.  On the other hand though, Segal could be full of it looking to squeeze out one more pay-day from his aging client.

I do know one thing though.  If Moss really is in tremendous shape and has temporarily adjusted his attitude, as he did in 07 with New England, whichever team gets him will reap some major benefits.

This whole situation is a prime example of a high risk high reward scenario.  And Moss is not a high risk in the respect of being extremely expensive.  He is a high risk due to the fact that nobody knows if he will be “2007 Randy” or “2010 Randy.”  And not just with his on field performance.  But in how he carries himself in the locker room and off the field.

The average NFL career is 3.3 years.  An average career for an NFL wide receiver is 2.81 years.  Moss has now played 13 years in the NFL.

So can Randy Moss still be a boss?

One response to “Can Moss still be a boss?”